Home » Grinded or Ground – Which is Correct?

Most English verbs are regular, which means they follow a clearly delineated set of conjugation rules. Some, though, are irregular—they are conjugated in unpredictable ways that are not usually constant across words.

Grind is one such verb. It becomes ground in the past tense, in much the same way that find becomes found.

What about grinded, though? You may have seen this word appear in print sources if you are an English major or are fond of perusing 19th-century spice catalogs. However, as a modern writer, you only have one real choice in your own work.

What is the Difference Between Grinded and Ground?

In this article, I will compare ground vs. grinded. I will outline the correct conjugation of this verb and use it in various example sentences, so that you can see it in context.

Then, I will show you a mnemonic device that makes choosing grinded or ground much easier.

When to Use Ground 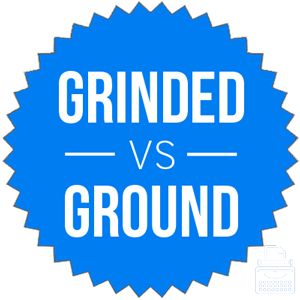 What does ground mean? Ground is the past tense conjugation of the verb grind. To grind is to crush something into smaller particles through continuous physical force.

Coffee beans are ground into fine particles before having hot water poured over them to brew coffee. Peppercorns are also ground before being added to food to intensify its flavor.

Of course, ground has other meanings. As a noun, it means the earth, for instance. Those meanings are important, but they are not relevant to the distinction between ground and grinded.

When to Use Grinded

What does grinded mean? Grinded is a mistaken conjugation of the verb grind when grind means to crush something into particles.

The above chart graphs grinded vs. ground over the past 200 years. I have isolated the words’ use as verbs by charting the phrases ground down and grinded down.

As you can see, ground is the only standard conjugation of this verb; grinded sees virtually no use whatsoever.

As I mentioned above, grind is an irregular verb, which means it doesn’t follow the regular rules used by most verbs in English.

Here are some ways to conjugate grind:

Grinded is a legitimate conjugation in a different sense, however. There is a type of dance known as grinding, where grinded is the correct past tense. This, however, has nothing to do with ground.

If you are looking for the proper past tense of grind, there is only one correct choice.

Ground is considered the standard inflection of this past tense verb by virtually everyone.

Since ground and found are both past tense verbs, you can use this rhyme to remember that ground is the best version of this word to use.

Is it ground or grinded? Ground and grinded are two variants of the past tense conjugation of the verb grind.