Home » Sometime vs. Some Time: What’s the Difference?

If you are describing the time at which something happened, or how long it will be before something will happen, it is important to be specific. However, there are times when you do not have enough information to be specific.

Luckily, English has words and phrases perfectly suited to this lack of certainty. Two of them, sometime and some time, are adverbs that many writers get confused. After you read this article, though, you will know which one is which, and what they mean.

What is the Difference Between Sometime and Some Time?

In this article, I will compare some time vs sometime. I will include sentence examples for each word to illustrate its proper meaning and use.

Plus, I will reveal a memory tool you can use to help you decide whether you mean sometime or some time.

When to Use Sometime

What does sometime mean? Sometime is an adverb. It refers to an unspecified point in the past or future.

Sometime can also function as an adjective, where it is a synonym of former, and often refers to an “on again, off again” situation, like it does in this sentence:

Sometime should not be confused with sometimes, an adjective meaning often, but not always.

When to Use Some Time

What does some time mean? Some time is an adverb phrase that means quite a while. The sentences below demonstrate its proper use.

Of course, the words some and time could conceivably appear adjacent one another in a sentence without being an adverb phrase. In these instances, some is an adjective referring to an unspecified quantity, and time is a noun, referring to what a clock reads. Here is an example:

Phrases That Use Sometime, Some Time

Here are a few popular phrases using these words and how they should appear in writing.

Call me sometime: call me at an indefinite future time.

Some time ago: quite a while ago. 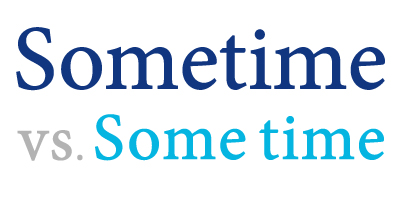 You can easily see the difference between these two words by contrasting their two senses in sentences otherwise identical.

In this sentence, the exact time when Greg reached out is unknown.

In this sentence, Greg waited a while before reaching out.

It is easy to remember that some time means a while since both of those phrases contain two words.

Is it sometime or some time? It is easy to confuse sometime and some time. They can both function as adverbs, and even though they are only differentiated by being spelled as one word or two, they are not interchangeable.

You can remember that some time means a while since these phrases both comprise two separate words.

If you find yourself in need of additional help, you can always check this article for a quick refresher.