If you are describing someone with whom you enjoy spending time and whose company is pleasant, should you use likable or likeable to describe this person?

At first glance, you might choose likeable, simply because it is less likely to be confused with lickable. It might be the case that you find someone whose company you enjoy lick-able, but you should not write about these feelings in professional or academic contexts.

Your choice is then between likable and likeable, which are actually two spelling variations of the same word. During the 19th century, American writers developed their own standardized spellings of certain words as part of an attempt to form a uniquely American style of English.

Continue reading to learn more about likable and likeable.

What is the Difference Between Likeable and Likable?

In this post, I will compare likable vs. likeable. I will use each of these words in at least one example sentence, so you can see how they appear in context.

Plus, I will show you how to use a mnemonic device to choose either likable or likeable correctly each time.

When to Use Likable 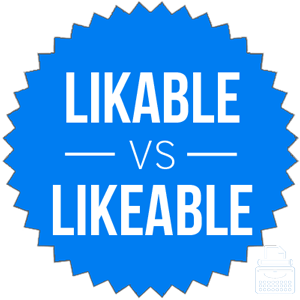 What does likable mean? Likable is an adjective that means pleasant to be around. It can be a synonym of words like pleasant and attractive.

If you like someone, you enjoy his or her company and have fun spending time with this person. Likable, then, is literally able to be liked.

People can be likable, but so can other things, like dogs, food items, and places. Most of the time, though, the word is used to describe people with whom you enjoy spending time.

Likable is the American English spelling of the word and follows other American words that favor shorter spellings, cancelled/canceled; travelling/traveling, colour/color.

Words with a more direct analogy are livable and lovable, both of which are American spelling. Liveable and loveable are the British counterparts.

When to Use Likeable

What does likeable mean? Likeable is another way to spell the same word. It is the preferred spelling in British English, while American writers are more likely to use likable.

These graphs show the relative usage of likeable vs. likable in published English books since 1800:

As you can see, the British have always preferred likeable. Americans developed a preference for likable just before the turn of the 20th century, during a time period when many writers adopted a distinctly Americanized spelling to differentiate themselves from their British brethren.

Since these words are really just two different ways to spell the same word, they are interchangeable in terms of meaning. The spelling you choose depends on your intended audience.

Since likeable has an extra E, like England, it’s not hard to remember when to use this word.

Is it likeable or likable? Likeable and likable are spelling variations of a word that means pleasant or attractive.

There is no difference in meaning between the two.