Most people like to think of themselves as reasonable people, guided by common sense and given to sound thinking.

Whether this is true for any given person is usually up for debate. The spelling of words, however, is not, and whether you describe someone as rational or rationale makes a difference.

Rationale and rational are actually different parts of speech. Only one is an adjective, so if you use the wrong one, you risk fracturing the structure of your entire sentence.

So which of these words is which? Continue reading to discover the difference.

What is the Difference Between Rational and Rationale?

In this post, I will compare rational vs. rational. I will use each of these words in at least one example sentence, so you can see how they appear in context.

Plus, I will show you a helpful memory tool that makes choosing either rational or rationale much easier.

When to Use Rational 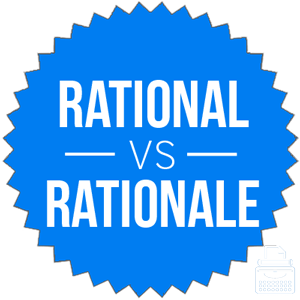 What does rational mean? Rational is an adjective. It means sensible or logical. Someone who is rational is able to think clearly about something and reach a sound conclusion. A rational idea is realistic, achievable, and useful.

Here are a few sentence examples,

Rational has been used in English since at least the 14th century. It comes from a similar Middle English word, which was itself derived from a term that the French borrowed from Latin.

When to Use Rationale

What does rationale mean? Rationale is a noun. A rationale is an explanation of the reasoning behind an idea or belief. Depending on your profession, you may be required to provide a rationale for many or most of your decisions, especially if those decisions are expensive or time-consuming. Rationales can be formal documents or an informal defense of a perspective.

Here are some example sentences that include the word rationale,

Rationale comes from similar origins in Latin, but it wasn’t used in English until 1657.

The spelling and pronunciation of these two words are similar, but they differ ever so slight.

Rational is three syllables and is pronounced rash-uh-null, with the last syllable being similar to that of proportional.

Rationale is three syllables and is pronounced rash–uh-nal, with the last syllable being similar to that of morale and chorale.

Since these words are actually different parts of speech, your choice between them comes down to how you use them in a sentence.

Since rationale and reason both contain the letter E, you should have little trouble remembering that rationale is a set of reasons that support an argument.

Is it rationale or rational? These two words are never interchangeable, so you will need to be sure you know how to use each correctly.