Is the mythical creature that symbolizes Easter a bunny or rabbit? What about the ferocious beast that savaged the knights in Monty Python and the Holy Grail?

The distinction between bunny and rabbit might seem trivial in the modern day, but a distinction exists to be made. Continue reading to learn the difference between these two words and whether rabbit or bunny better describes a given creature.

What is the Difference Between Bunny and Rabbit?

In this article, I will compare rabbit vs. bunny. I will use each of these words in at least one example sentence, so you can see them in context.

When to Use Rabbit

What does rabbit mean? The word rabbit is a noun. A rabbit is a type of mammal. They are small, furry animals with large ears and powerful back legs that can be seen hopping around in meadows in the springtime.

A rabbit is different from a hare. While they appear similar, and belong to the same biological family, they are different species.

Here are some examples of rabbit in a sentence,

When to Use Bunny

What does bunny mean? Bunny is another noun and another name for a rabbit, but it usually refers to a young rabbit, often a baby rabbit.

The diminutive bunny is unscientific and should be avoided in contexts requiring taxonomical precision.

Here are a few example sentences for bunny, 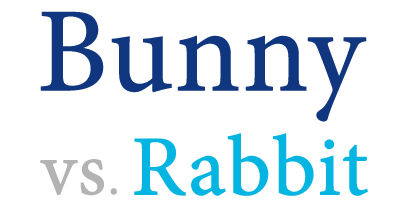 Here’s an easy trick to remember rabbit vs. bunny.

A rabbit is a small mammal, and a bunny is a small rabbit. You can remember this because bunny and baby both start with the letter “B.” Bunnies are usually small or baby rabbits.

Is it bunny or rabbit? Both of these words refer to the same mammal, but they usually refer to that mammal at different stages of development.

Don’t forget, you can also reread this article any time you need a quick refresher.