Home » Anyway vs. Any way – What’s the Difference?

You can often tell when someone is tired of talking to you, because they will begin their next sentence with anyway and then make up an excuse to go do something else.

Most English users are familiar with this transition. Anyway is a versatile word that is frequently used in other contexts, as well.

It also happens to be a compound—of the words any and way. If we leave the words separated, do they mean the same thing?

As is the case with most compound words, the situation is not that simple. Any way also has a place in sentences, but it is used in a different way.

What is the Difference Between Anyway and Any way?

In this post, I will compare any way vs. anyway. I will use each spelling in at least one example sentence, so you can see it in context.

Plus, I will also show you a mnemonic device that makes choosing any way or anyway a bit easier.

When to Use Anyway

What does anyway mean? Anyway is an adverb used to express support for something, even if there might be valid reasons not to do so.

A person might know that giving advice to a friend could hurt his feelings, but he gives it anyway because the advice is needed.

Anyway is often a transition word between topics, like in these sentences:

When to Use Any way

What does any way mean? The two-word any way is not a valid substitute for the adverb anyway. That said, any way does appear as two words in various sentences.

Here, way means method, and any is an adjective that refers to a total lack of specificity. They make sense in context, but they are clearly not a substitute for the adverb anyway. 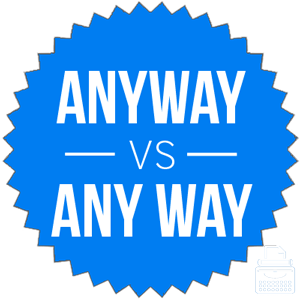 The important difference between these terms is the role they play in a sentence. They are different parts of speech:

Is it anyway or any way? These words cannot be substituted for each another in any context.

In summary, use anyway to transition or as an adverb, not any way.