Home » Miniscule or Minuscule – Which Spelling is Correct?

English borrows many words from other languages, including Latin, French, and German.

Sometimes, these words are borrowed wholesale, without any modification whatsoever, but other times they are anglicized so that they appear similar to other English words. In these cases, they are called loan words.

Often, nuances of meaning are lost in translation. Minuscule is a loan word from Latin, where it was related to a word that meant rather small. English has several other words that mean rather small, including miniature, which starts with the prefix mini.

In your reading adventures, you may have seen the word spelled both ways. Continue reading to find out which version you should use.

What is the Difference Between Miniscule and Minuscule?

In this post, I will compare miniscule vs. minuscule. I will use outline the correct spelling and use the word in several example that demonstrate its proper context.

I will also show you a useful memory trick to help you when you are stuck choosing either miniscule or minuscule in your own writing.

When to Use Minuscule 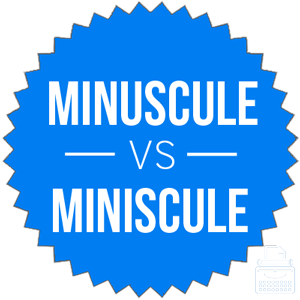 What does minuscule mean? Minuscule, so spelled, is an adjective that means very small. In the context of typography, it can also refer to lowercase letters. Most of the time, though, it is a synonym of words like tiny and infinitesimal.

Here are a few sentences that contain the word minuscule,

Some people mistakenly think that minuscule is spelled as miniscule, presumably based on the assumption that the word relates to the prefix –mini. That is not the case, however.

In fact, minuscule derives from the word minus and has nothing to with –mini, hence the spelling minuscule.

The misspelling miniscule has gained traction in recent years (see below), but minuscule continues to predominate in print and other sources as the standard spelling.

When to Use Miniscule

What does miniscule mean? Miniscule is a misspelling of the word minuscule.

As I mentioned above, minuscule is related to the word minus, but some have come to associate it with mini, an abbreviation of miniature. Thus, the U in minuscule is often replaced with an extra I.

While not all spellcheckers flag miniscule as a misspelling, minuscule still predominates in edited prose, and style manuals such as The AP Stylebook and Chicago Manual of Style prescribe minuscule, as does The New York Times. The popular British usage guide Fowler’s also suggests that writers avoid the spelling miniscule.

This chart shows the relative usage of minuscule vs. miniscule,

As you can see, miniscule has gained considerable traction since around 1940 or so. It still, however, fails short of minuscule by a margin of roughly 2:1.

A helpful way to remember the correct spelling of minuscule is to think of the extra “i” in the misspelling miniscule as standing for incorrect, you can remember to always use minuscule in your writing.

Is it minuscule or miniscule? Minuscule is an adjective that means very small. Miniscule is a nonstandard variant that still shows up in published writing from time to time.

In general, stick with minuscule, since it is true to the word’s origins.