Home » Anyone or Any one – What’s the Difference?

As phrases become more and more common, they might become truncated into compound words. Today, rail road is railroad, and any one is anyone.

What do we do with the older versions of the phrases, though? Is there ever a reason to continue using them?

What is the Difference Between Anyone and Any one?

In this post, I will compare anyone vs. any one. I will discuss the differences between these spellings before providing example sentences for each.

I will also show you a memory tool that will give you an easy way to remember whether to use any one or anyone.

When to Use Anyone

What does anyone mean? Anyone is an indefinite pronoun that refers to an unspecified person. If you need a person to do something, but it doesn’t really matter which person it is, anyone is the word to use.

Anyone is a synonym of its fellow pronoun anybody. Here are a few examples of its use in real sentences:

When to Use Any One

What does any one mean? Any one is not the same as anyone, and the two spellings cannot be used interchangeably. Any one means any single person or thing. Any one emphasizes singularity.

Any one occasionally appears as a pronoun, but this is relatively uncommon and should be avoided. These two spellings have developed their own usage cases.

As you can see from the chart below, which graphs any one vs. anyone over time, the two-word any one used to be more popular than anyone, but about halfway through the 20th century, writers began to prefer the new compound.

I have isolated the use of these variants as pronouns by graphing anyone can see and any one can see. The chart is still not scientific, as it only looks at books published in English since 1800. Still, it allows us to view a clear, long-term trend in favor of anyone. 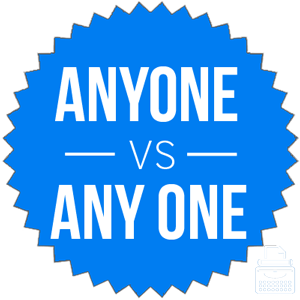 These words contain all the same letter, but they are not interchangeable.

Since anyone rhymes with Tennyson, the last name of famous poet, and both are three-syllable single words, remember to use anyone when referring to people.

Is it anyone or any one? These two spellings are never interchangeable.

Today, most writers reserve anyone exclusively for the pronoun sense.