Home » Cast vs. Casted – What is the Past Tense of Cast?

English has standard conjugation rules that most verbs follow. These words are called regular verbs.

Not all verbs follow the rules, though. Words that do not follow standard conjugation rules are called irregular verbs, and there is no easy way to tell how they should be conjugated except to memorize them.

Cast is one such verb. Is its past tense cast or casted? Continue reading to learn which form you should use.

What is the Difference Between Cast and Casted?

In this post, I will compare cast vs. casted. I will use each word in at least one example sentence, so you can see how it appears in context.

Plus, I will show you a helpful memory tool that will make it easier to choose cast or casted in your own writing.

When to Use Cast 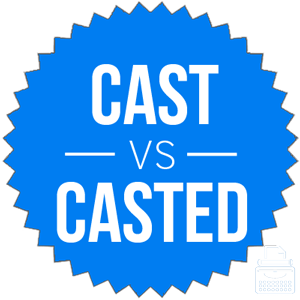 What does cast mean? Cast can be a noun or a verb.

As a noun, cast means an object made by shaping molten material in a mold or the actors taking part in a play or movie.

As a verb, cast has several meanings. It can mean to throw something, like in these examples,

Cast can also mean to shape molten material in a mold.

Cast is an irregular verb, so it does not follow the standard rules of English conjugation.

As a past participle, cast can also function as an adjective, where it modifies a noun, like in the phrase cast iron.

When to Use Casted

What does casted mean? Casted is an incorrect past tense conjugation of the verb cast. It almost never appears in print or edited works of any kind.

As you can see in the above chart, which graphs casted vs. cast across time, casted doesn’t even register a blip on the radar for over 200 years.

Bryan Garner, in his book Garner’s Modern English Usage, estimates the disparity in usage between these two words to be 1,484:1. In other words, avoid casted in your writing. It has no use in professional writing of any kind.

You should use cast in all situations. Casted is an improper conjugation that should be avoided.

Since cast rhymes with other past tense verbs like passed and gassed, you can use the rhymes as a reminder that it can function as its own past tense conjugation.

Is it casted or cast? While it might be tempting to use both of these conjugations in your writing, only one of them is an accepted past tense of cast.

You should use cast in your writing exclusively.