Home » Could vs. Would – What’s the Difference?

English is full of verbs that seem interchangeable or at least only trivially different, but skilled writers know when and how to use them for maximum clarity.

Could and would are two such verbs. They both have many uses, which makes them confusing for many beginning writers and English language learners.

Although they seem similar, there are definite situations when one word is more appropriate than the other. Verb choice is a crucial part of careful writing, so read on to find out the differences between these two confusing verbs.

What is the Difference Between Could and Would?

In this article, I will compare could vs. would, and I will use both words in several example sentences. This way, you will be able to see them in their proper context.

Additionally, I will show you a memory tool that can help you choose would or could correctly every time.

When to Use Could

What does could mean? Could is a verb with many senses.

Could is the past tense of can, a verb used to denote ability. In this sense, could refers to some ability that someone had in the past.

In both of these examples, could is being used to express an ability that the speaker had in the past.

In other instances, could is a modal verb used to denote possibility. It is also used for some conditional present and future tenses of can.

When to Use Would

What does would mean? Would is also a verb with many senses.

Would is the past tense of will, which denotes both ability and certainty.

In these examples, the speaker is using would to express a past action, which is helpful when comparing would vs. could.

Let’s take the first of these two examples,

Would is also a modal verb used to denote possibility, and it often refers to something that is conditional but definite within those conditions.

But, when we use would, there is no question where the vacation will be. It will be somewhere tropical. 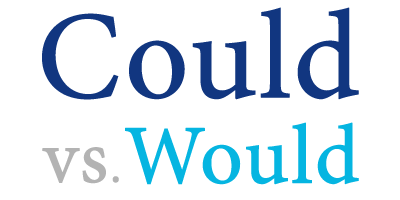 Could and would are related, but they mean different things. Could expresses possibility, while would expresses certainty and intent.

A good way to remember the differences between these two words is simply to bring each word back to its root verb.

If you are looking to make a statement of ability, think to yourself, “I can do that.”

If you are looking to make a statement of certainty or intent, think to yourself, “I will do that.”

This won’t always get you to the right answer, but it should work most of the time.

Is it could or would? Both could and would are verbs that have many senses.