Home » Amoral vs. Immoral vs. Unmoral: What’s the Difference?

Morality is a slippery subject. It concerns the difference between right and wrong. Unfortunately, many people see right and wrong differently, especially if they come from different cultures. A variety of perspectives can foster healthy and meaningful debate, but a poorly calibrated moral compass can also lead someone to cause a great deal of suffering.

Since there is more than one way for an action or principle to lack morality, English has several words for something that is not moral. The most common ones are amoral, immoral, and unmoral. Many writers confuse these words, but they have nuanced meanings and should be used carefully.

What is the Difference Between Amoral, Immoral, and Unmoral?

In this article, I will compare amoral vs. immoral vs. unmoral. I will use each word in a sentence to illustrate its proper meaning and context. I will also explain a useful trick to help you remember whether unmoral, immoral, or amoral is appropriate for your writing.

When to Use Immoral

What does immoral mean? Immoral is an adjective. Something that is immoral is evil or wrong. It means failing to adhere to moral standards.

To be immoral implies acting or thinking in a way that violates one’s conscious morality. In other words, the person should have known better, but did it anyway.

When to Use Amoral

What does amoral mean? Like immoral, amoral is an adjective. It means not influenced by right and wrong. If a person who is immoral acts against his conscience, a person who is amoral doesn’t have a conscience to act against in the first place.

Infants could be said to be amoral since they have not yet developed the brain capacity to understand right and wrong. Some extreme sociopaths are also amoral, since they lack a conscience as a result of a cognitive disorder.

When to Use Unmoral

What does unmoral mean? Unmoral is a third adjective. It refers to something to which right and wrong are not applicable, such as animals, forces of nature, and machines. 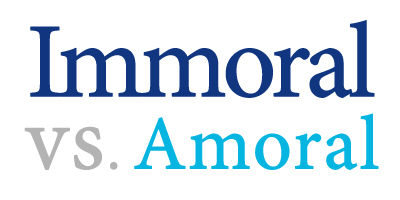 Now, let’s go over a trick to keep track of immoral vs. amoral.

You can remember to use immoral for someone who understands right and wrong but engages in evil behavior anyway, since the phrase “I know better” and the word immoral both start with the letter I.

In most other situations when referring to humans, choose amoral. When talking about non-moral agents, such as animals or weather patterns, use unmoral.

Is it amoral or immoral? Both of these words deal with morality, but they apply to different agents and different people.

You can remember that immoral people understand right and wrong, but do wrong anyway, since immoral and the phrase “I know better” each contain the letter I.

Now you know whether something is amoral or immoral. For a more detailed exploration of right and wrong, you might want to read a book on moral philosophy. But if you need a quick refresher on how these words are used in the context of language and grammar, you can reread this article for a quick refresher.