Homophones are words that sound the same but mean different things. They might even be different parts of speech.

Heard and herd are homophones that can both function as verbs, but only one of them is a noun. Do you know which one it is?

If not, don’t worry—you can read the rest of this article to find out.

What is the Difference Between Heard and Herd?

In this post, I will compare herd vs. heard. I will use each of these words in at least one example sentence, so you can see how they appear in context.

Plus, I will show you a helpful memory tool that will make choosing either herd or heard much easier in your future writing endeavors.

When to Use Heard 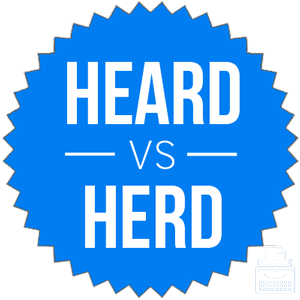 What does heard mean? Heard is a verb. It is the simple past tense form of the verb to hear, which means to perceive auditory sensations.

The sentences below use heard as a verb,

To find out about here vs. hear, see here.

When to Use Herd

What does herd mean? Herd, can be a verb or a noun. A herd is a group of animals. Many animals live in herds, like bison, cows, and zebras.

Herd can also be used as part of a compound word that means one who tends to animals. A shepherd, for instance, watches sheep, while a goatherd takes care of goats.

When herd is used as a verb, it describes animal behavior related to grouping. Animals who gather in groups to live out their lives are said to be herding.

If you want to use either of these words as a noun, you should choose herd, since heard is never a noun. They can both be verbs, though, so your choice in this context is more difficult.

Remember Heard vs. Herd: Heard is a conjugation of the verb hear, which means to perceive auditory signals. Since heard and auditory each contain the letter A, using heard as a verb in the context of hear is an easy choice to make.

Is it heard or herd? While these two words are homophones, they are never interchangeable.