It’s a common complaint among people who are learning English that the language lacks consistency. English was spoken in both the Old and New Worlds at a time when rapid communication across long distances was impossible, which has led to a differing and sometimes contradictory set of conventions.

The same word can be spelled differently in American and British English, for instance. This duality can be confusing, but not every word has multiple spellings.

Many people aren’t sure whether to write the number 40 as forty or fourty. It’s a common misconception that fourty is conventional in British English, while forty is the Americanized version.

However, only one of these spellings is correct, regardless of region.

What is the Difference Between Forty and Fourty?

How do you spell 40? In this article, I’ll explain the difference between these two words, and reveal whether forty or fourty is the correct spelling. I’ll use the correct term in a sentence and tell you an easy trick to remember the difference.

When to Use Forty

Contrary to popular belief, there is only one correct spelling of the number 40.

Forty is the proper way to spell the number, and fourty is always incorrect. It’s easy to see why this would be confusing, since the base number is four, and the U isn’t dropped from other numbers like fourteen or even forty-four. While there are British and American spellings of some words, forty is not one of them.

The following sentences are correct:

When to Use Fourty

You should never use fourty. It is an incorrect spelling of forty. Fourty is not correct in British or American English, and it appears to have never been the correct spelling.

When writing out the number 40, forty is the only correct option. As you can see from the following chart, if fourty was ever used in proper English, it must have been well before 1800:

This chart is not exhaustive of all written texts, as it only reflects data from books written in English since 1800, and no other print sources. However, it is certainly thorough enough to see that the use of fourty to signify the number 40 has not been nonexistent since at least the beginning of the 19th century.

Although fourty is universally rejected, it still finds its way into the writing of those who should know better.

Fourty vs. Forty – Trick to Remember the Difference 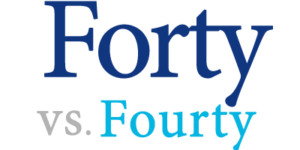 Forty dollars or fourty dollars? Forty is the written form of the number 40. Fourty is a spelling error for Americans and Britons alike.

You can remember to always use forty by noticing that forty contains the word for, and forty is correct for everyone. Fourty is never a correct spelling.

Is it forty or fourty? While there are some words in English that have multiple spellings, forty isn’t one of them.

Fourty is not a word, and forty is the only way to spell the written form of the number 40.

The decision to use fourty or forty is therefore an easy one. Use the memory trick “forty is for everyone” to remember the proper spelling, or you can always refer back to this article.