Cue and queue sound the same when spoken aloud, but they do not mean the same thing. This difference in meaning despite identical pronunciations makes them homophones.

If you are writing about a game of billiards, you can avoid ridicule by using the correct word to describe the equipment used in such games. But what is the correct word? Cue or queue?

You can find out by reading this article.

What is the Difference Between Cue and Queue?

In this article, I will compare cue vs. queue. I will also use each word in a sentence to illustrate its proper meaning and context.

Plus, I will give you a helpful trick to help you decide whether cue or queue is correct for your writing.

When to Use Cue

What does cue mean? Cue can be a noun or a verb.

As a noun, cue can mean a signal or a hint telling another person to do something, like in the following sentences.

Cue also has another meaning in its noun form. Without delving too deeply into the rules of billiard sports, a cue can also refer to the ball with which all other balls must be struck, or the stick used to put such a ball in motion.

As a verb, cue can refer to the act of signaling someone, e.g., giving them a cue.

In the context of billiards, cue means to strike a ball with a stick. See the sentence below for an example.

When to Use Queue

What does queue mean? Like cue, queue can be a noun or a verb.

As a noun, queue refers to a lineup, either of people or other things. See the following sentence for an example.

Queue is also used as a verb, where it means to form a line or to line things up. Here is an example:

Is it Cue Up or Queue Up?

Adding somewhat to the confusion of these two words, both phrases, cue up and queue up are acceptable to use, but they relate to each word’s individual definition.

For example, the phrase cue up is used when positioning an audio or video in readiness for playing. A radio talk show might ask his producer to cue up clip 17.

Similarly, the phrase queue up is used when someone is lining up. Air travelers queue up when their plane is boarding. If you have Netflix, you might have queue of shows that have lined up, waiting for you to watch. 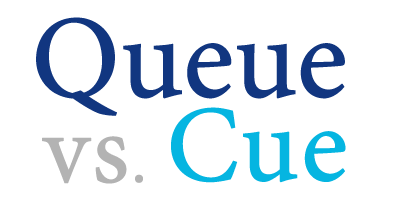 Here is a helpful trick for remember queue vs. cue. Queue and cue can both be used as a noun or a verb, but in different contexts.

You can remember that queue refers to a lineup of people since it has five letters, like the word waits. A person in a queue waits for their turn, so it should be easy to remember to save queue for these instances.

Is it cue or queue? Cue and queue can each be used as a noun or a verb.

As a noun, a cue is either a signal or a piece of sporting equipment. As a verb, it refers to the act of signaling someone, or the act of striking a ball in billiards games.

As a noun, a queue is a lineup of people or other things. As a verb, queue means to line something up or to form a line.

A person in a queue waits their turn. This should be easy to remember since queue and waits have the same number of letters- five.

If you still need help remembering whether to use queue or cue, feel free to check this article again to review the details.