If you are like this author, you would never fall in love with someone who didn’t understand proper English grammar. If I received a card from someone on a holiday celebrating romantic love but the card contained punctuation errors, I would not feel romantic love for the person who gave it to me. Instead, I would be annoyed. Kidding, of course! (Only partly.)

To avoid finding yourself in a similar situation, you should always know whether to use an apostrophe in Valentine’s Day.

In this post, I will compare Valentine’s vs. valentines. I will use each of these words in at least one example sentence, so you can see how they appear in the proper context.

Plus, I will show you a helpful memory tool that makes choosing either valentines or Valentine’s easier for your own writing.

So, does Valentine’s Day have an apostrophe? Let’s find out.

When to Use Valentine 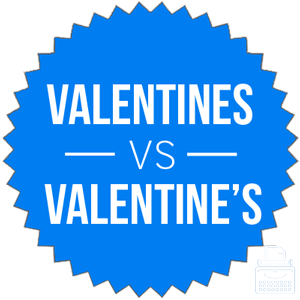 Valentine can be a proper noun, in which case it refers to St. Valentine, the patron saint of courtly love. In this usage, it is always capitalized, forming Valentine.

In modern times, valentine can also refer to a gift given to a lover or the person to whom such a gift is given. In these senses, it is a common noun and should not be capitalized.

Valentine, when used to refer to a gift given to someone on Valentine’s Day, can be singular or plural.

As for the proper noun, there was only one St. Valentine; so pluralizing it as Valentines is not correct.

When to Use Valentine’s

How to spell Valentine’s Day: Valentine’s Day, so spelled, is a holiday celebrated on the 14th of February, commemorating the death of St. Valentine, a 3rd century Roman saint who is associated with a tradition of courtly love.

Since Valentine’s Day is a holiday named after St. Valentine, it is constructed in a possessive formation, where Valentine is a proper noun, and the suffix –‘s indicates that Valentine possesses something.

Here are a few examples of how you might see the holiday’s name used in common parlance,

The holiday celebrated on February 14 is unequivocally spelled Valentine’s Day, so if you are writing about this holiday, always use the spelling Valentine’s. It is the day belonging to St. Valentine, not a day named after the plural noun valentines.

Valentine’s vs. valentines check: Since St. Valentine was the patron saint of love, and Valentine’s Day is a holiday celebrating love, remembering that Valentine’s is a possessive is an easy task.