In spoken English, we can use context to determine which word is being used, but these words become more confusing in writing, especially as verbs.

In this article, I will show you how to tell the difference between these two verbs. Is it waive or wave? Continue reading to find out.

What is the Difference Between Waive and Wave?

In this post, I will compare waive vs. wave. I will use each word in an example sentence, so you can see it in its proper context.

Plus, I will give you a helpful memory tool you can use to remember whether wave or waive is what you mean.

When to Use Waive

What does waive mean? Waive is a verb. It means to decline to exercise a rule or right. Waive is often used in legal contexts.

Phrases That Use Waive

Waive is used in a few common phrases.

When to Use Wave

What does wave mean? Wave can be a noun or a verb.

As a noun, wave means a hand signal, often used as a type of greeting, or water that crashes against the shore. In this second sense, it can also be used metaphorically to mean any powerful force.

See the sentences below for examples,

The wave is also a popular thing at sporting events,

As a verb, wave means to gesture with one’s hand or to shake something back and forth as a gesture. It could also mean to flutter in the wind.

I have included a few example sentences here,

Phrases That Use Wave

Wave is used in many more phrases than is waive. Here are a few of the more common ones. 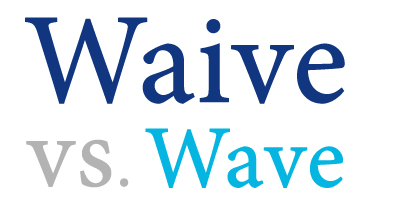 Here is a helpful trick to remember wave vs. waive.

Both wave and waive can be verbs, but only wave is a noun.

As a verb, the picture becomes murkier. Remember that waive means to relinquish a right. Since waive contains the letter I, you can use all the I’s in the sentence “I waive my rights” to remember the most common context for this verb.

Is it waive or wave? Waive and wave are both verbs. Only wave is also a noun.

You can use the I in waive and the sentence “I waive my rights” as a reminder of this word’s meaning.