Home » Because vs. Since – What is the Difference?

When you need to show how two ideas are related, you will often use either because or since. These words are simple to use, and help get your point across clearly and concisely.

Because and since are conjunctions, which means they link things together both grammatically and logically. They are also easy to misuse or overuse, which is why it is important to know the differences between them and how to use each correctly.

What is the Difference Between Because and Since?

In this post, I will compare since vs. because. I will use each word in several example sentences because it is important to see how they function in context.

I will also use a mnemonic device that will help you when you need to choose either since or because.

When to Use Because

What does because mean? Because is a conjunction. It typically expresses a logical link between two ideas or events. Often, this link is due to cause and effect.

When to Use Since

What does since mean? Since is also a conjunction that expresses a logical link between two ideas or events. In this way, it can sometimes be a synonym of because.

Since typically describes a weaker or indirect cause and effect link, like in the sentences here:

Of course, since also refers to two things that are linked temporally, one of which happens after the other.

It is not always clear whether since implies temporal or logical linkage, so writers need to use it carefully and construct sentences that minimize ambiguity. 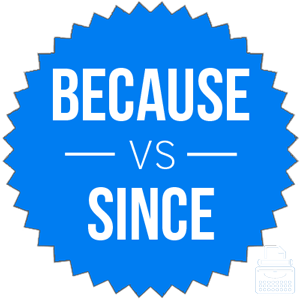 In the sense of logically connected ideas or events, because and since are synonyms.

Because vs. Since Check: Since and sequential each begin with the letter S, so it should be easy to link since with events that happen in sequence.