Have you ever read a passage and wondered whether the author is writing about an act of sacrifice or a modification?

If you have, it is probably because the author misused either alter or altar. Their spellings are very close, so even experienced writers sometimes use the wrong one, but they are actually different parts of speech.

This article will provide an explanation of the differences between these two words, should you require one. Now you won’t have to worry about whether to use altar or alter in your own writing, and your reading comprehension will improve, as well.

What is the Difference Between Alter and Altar?

In this post, I will compare alter vs altar. I will use both of these words in at least one example sentence, so that you can easily see how to use them correctly. Plus, I will discuss a useful trick to help you remember whether altar or alter is appropriate for your writing.

When to Use Alter

What does alter mean? Alter is a verb. It means to change or modify something. See the sentences below for examples.

Sometimes, alter is an adjective, as in the phrase alter ego. In this case, it is a synonym for alternative.

When to Use Altar

What does altar mean? Altar is a noun. An altar is a structure upon which sacrifices are made. Altars can be shaped like a table, or a simple pile of rocks, or many other shapes.

During a wedding ceremony, you lead someone to the altar, or in some unfortunate circumstances, leave someone at the altar. 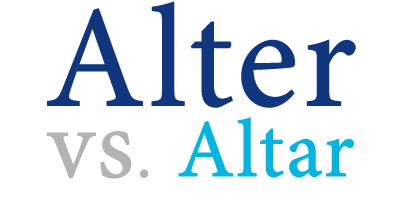 Here is a helpful trick to remember altar vs. alter.

The most important thing you need to remember is that altar is a noun and alter is usually a verb, and occasionally an adjective.

The two words are never interchangeable.

You can remember that alter is a verb since both alter and verb are spelled with the letter E.

Is it alter or altar? Alter and altar are spelled in similar ways, but they are different parts of speech.

Alter and altar are never interchangeable. You can remember that alter is a verb since both it and the word verb are spelled using the letter E.

In summary, altar is a noun, but alter is a verb. If you have trouble remembering, you can always check this article for a quick refresher on these words.