If someone stabs you with a knife, did they afflict you with a wound, or inflict a wound on you? On the other hand, when you catch a cold, are you inflicted by a virus, or afflicted with one?

Many writers aren’t sure how to use inflict and afflict correctly, and today I want to discuss how to use these two verbs.

What is the Difference Between Afflict and Inflict?

In this post, I will compare afflict vs. afflict. I will use each of these words in at least one example sentence, so you can see them in context. Plus, I will show you a useful memory tool to help you remember whether the afflict or inflict is the verb you seek.

When to Use Afflict

What does afflict mean? Afflict is a verb that means to be caused trouble or harm.

Afflict is usually used with an object preceded by the preposition with, so that a person is afflicted with something—a disease, a sickness, a mental problem.

When to Use Inflict

What does inflict mean? The verb inflict means to cause trouble or harm. Inflict is a transitive verb; it is always used with an object, and it takes the preposition on.

Nonliving things, such as scourges, punishments, taxes, regulations, etc., are inflicted on someone or something. 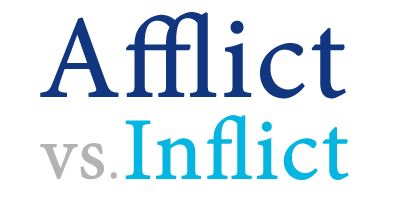 Now, let’s go over a trick to remember inflict vs. afflict.

Because inflict and afflict are so similar, many writers get them confused. Still, there are specific usage cases for each of these verbs. Bryan Garner, of Garner’s Modern English Usage, clarifies that “non-living objects, especially scourges or punishments, are inflicted on people; living things, especially humans, are afflicted with diseases.”

Is it inflict or afflict? Inflict and afflict are two verbs that are so similar that it is easy to confuse them.

The two words appear similar and have related meanings, but they are used in specific ways. Since afflict is used with diseases, remember that it and atherosclerosis, a type of disease, both begin with the letter A.

Nuances in meaning and usage can make similar verbs difficult to differentiate. Don’t forget, you can always check this site when you have questions about confusing words and other writing topics.