Home » Nobody vs. No One: What’s the Difference?

In recent times, many writers have become concerned with shortcomings in the English language regarding pronouns. The use of the generic masculine pronoun often leads to charges of sexism.

While stamping out sexism is a noble cause, it makes life difficult for socially conscious writers. English lacks a gender-neutral singular personal pronoun. Recently, many writers have begun to use nobody or no one instead.

If you are wondering whether you should join their ranks, continue reading.

What is the Difference Between Nobody and No One?

In this article, I will compare nobody vs. no one. I will use each in a sentence and illustrate the proper context of each.

Finally, I will discuss a useful memory tool to help you decide whether to choose nobody or no one for your own writing.

When to Use Nobody

What does nobody mean? Nobody is a pronoun that references not any person. It functions as a singular pronoun in sentences.

When to Use No One

What does no one mean? No one is used in much the same way as nobody. As a singular pronoun, this phrase also means not any person.

In contemporary English, both nobody and no one are often used as plural indefinite pronouns in tandem with a plural possessive pronoun, in circumstances when a writer wants to avoid the perceived sexism of gendered pronouns. The sentence below is an example:

A writer could substitute nobody for no one in the above sentence to achieve the same result.

These constructions are popular, but not yet universally accepted (see below for more details).

No One vs. Nobody: When to Use Which 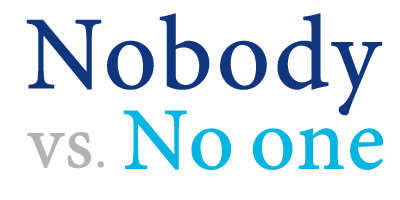 In general, no one is a more appropriate singular pronoun for academic or professional writing. Nobody is more common in British English than in American English, but you should probably still choose no one to maintain a formal voice. You can remember to choose no one by remembering the phrase “no one is number one” in formal writing.

Neither no one nor nobody is universally accepted as a plural indefinite pronoun yet. As Bryan Garner, author of Garner’s Modern English Usage (2016), argues,

“Although the usage seems inevitable in the long run, careful writers of AmE will probably wait until the opposition dwindles even further” (p. 631).

Unless you are interested in being on the forefront of the battle to minimize embedded sexism in English, you would do well to heed Garner’s advice.

Additional strategies for minimizing sexism include alternating singular masculine and feminine pronouns, using both at the same time (he or she, his or her, etc.), or splicing them together with slashes to form creations like s/he and he/she.

These tactics have found varying degrees of acceptance in some academic circles. You should use them if specifically instructed to do so, but in most cases, they will be distracting to your audience and should be avoided.

Again, according to Garner (2016), a better strategy would be to tailor your writing to avoid these pronouns altogether. You can do so by changing them to articles, changing the context of the sentence so that the subject becomes plural, or constructing your writing in such a way as to use relative pronouns like who and whom instead (p. 822).

Is it nobody or no one? Nobody and no one are singular pronouns that refer to not any person.

These words are not yet universally accepted as plural indefinite pronouns, but they will be someday. Until then, choose a different strategy instead if you are interested in minimizing sexism in your writing.

You can remember to choose no one over nobody in formal writing by remembering the phrase “no one is number one.” You could also reread this article if you need a quick reminder.