Home » To Hard or Too Hard – Which is Correct?

If you want to say that something is excessively difficult, would you use the phrase too hard or to hard?

When you hear an English speaker using these phrases out loud, they are pronounced identically. Still, their meanings are entirely different.

The distinction comes down to the homophones to and too, which also have another homophone in the number two. You can read more about these words here.

With the specific phrases too hard and to hard, however, should you use too hard or to hard?

There are situations where either one would work, but for a phrase that means excessively difficult, there is only one correct option.

What is the Difference Between Too Hard and To Hard?

In this post, I will compare to hard vs. to hard. I will use each of these words in at least one example sentence, so you can see how they appear in context.

Plus, I will show you a helpful memory tool that makes choosing to hard or too hard much easier.

When to Use Too Hard 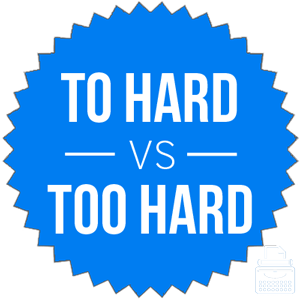 What does too hard mean? Too hard is an adjective phrase.

Too is a comparative adverb that can be a synonym of excessively, but it can also mean more than can be endured.

The word hard is an adjective, with several meanings: it could mean difficult or physically solid. Thus, something that is too hard is excessively solid or more difficult than someone can endure.

When to Use To Hard

What does to hard mean? To hard is pronounced identically to the phrase too hard, but it doesn’t mean the same thing.

The difference comes down to the distinction between too vs. to vs. two:

To hard would thus technically be a prepositional phrase (or at least part of one), while too hard is an adjective phrase.

Here’s an example of a sentence that used to hard as part of a prepositional phrase:

Notice that to hard doesn’t make a comparison; to is a preposition, hard is an adjective, and times is a noun.

Most of the time, you should use too hard. There are a few situations where to hard is grammatically sound, but none of them is synonymous with the comparative phrase too hard.

Too Hard vs. To Hard Check: The phrase to hard has an excessive amount of O’s in it, so you can use this to know that too hard means something is excessively hard.

Is it to hard or too hard? Both of these constructions can find their way into correct sentences, but they are never interchangeable.