When is the correct time to use a vs. an?

What exactly is the rule? Despite the confusion on when to use these two words, the rule regarding their use is actually quite simple.

What is the Difference Between A and An?

In this post, I will compare a vs. an. Both words are articles and are extremely common in the English sentence. As such, I will go over the general rule for a and an and use each in multiple example sentences.

When to Use A 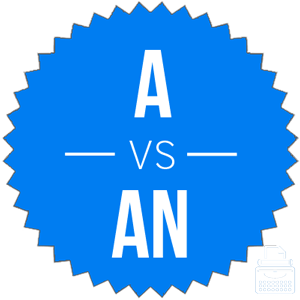 The basic rule for using a in a sentence is

The important part is the sound of the word that follows, not necessarily the letter with which it starts. The above examples have words that begin with vowels and consonants, but we use a for all of them because they begin with the sound of a consonant. More on this below.

When to Use An

An is used before words, abbreviations, acronyms, or letters that begin with a vowel sound, regardless of their spelling.

The rule only becomes tricky when you have a vowel with a consonant sound or a consonant with a vowel sound like in our above examples,

What if an Adjective is Added in Front of a Noun?

Some people aren’t sure how to apply this rule when an adjective appears before the noun being referred to.

For example, which of these are correct?

Problem Words with An vs. A

There is, however, some disagreement (although it is decreasing year by year) on how to treat certain words that begin with “h,” specifically historic and historical.

But how can that be? Ask any English speaker today to say “historic” and you will almost invariably hear a distinct “h” sound at the beginning of the word.

English speakers of today might pronounce “historic” with an “h” sound, but The American Heritage Dictionary has a wonderful usage note explaining how that was not always the case.

In the usage note, American Heritage states that “an” was at one time a more common variant before words beginning with “h,” words where the first syllable is now unstressed. This is why you will quite routinely see in 18th-century literature both “a historical” and “an historical.” Back then, this usage made logical sense because many people did not pronounce the “h” at the beginning of the word. The usage note goes on to say that “by the late 19th century educated speakers usually gave their initial h’s a huff, and the practice of writing an before such words began to die out.”

You will still see “an historical” in writing every now and then and, although The American Heritage Dictionary says that both forms acceptable in formal writing, “an historical” should be avoided. Both The Chicago Manual of Style and The AP Stylebook hold that “a historic” is the proper form.

There are a few other problem “h” words out there. Here is a list of most of them and their proper forms.

As we said above, this rule also applies to acronyms and initialisms. Whether or not to use an or a depends on the pronunciation.

So, to answer our opening question about URLs, it should be a URL since URL is normally pronounced U-R-L.

Is it a or an? Both a and an are used as articles in the English sentences, but their use use differs based on what words follow.

How to Use A and An: