As awareness of mental health issues continues to rise, terms from psychology and other social sciences have seen increased use in everyday language.

This awareness brings many benefits, including reduced stigma for those affected by mental health conditions. It can also have detrimental affects on the English language, though, when people misuse technical language without really understanding it.

This has unfortunately been the case with psychopath and sociopath. Even in the field of psychology, there has always been some overlap between these terms. Today, though, most people use them interchangeably to describe anyone who is manipulative or self-centered.

Learn the real differences between psychopath and sociopath here.

What is the Difference Between Sociopath and Psychopath?

In this post, I will compare sociopath vs. psychopath. I will use each of these words in at least one example sentence, so you can see how they appear in context.

Plus, I will show you a helpful memory tool that will make choosing either sociopath or psychopath easier in your own writing.

When to Use Psychopath 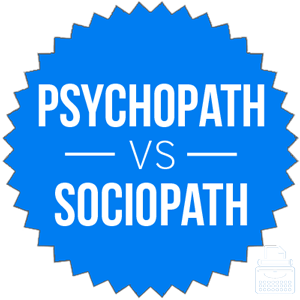 What does psychopath mean? Merriam-Webster defines psychopath as a mentally ill or unstable person, especially one affected by antisocial personality disorder.

Antisocial personality disorder (or APD) is a category of mental illness in the Diagnostic and Statistical Manual of Mental Disorders, 5th edition (DSM-V). The manual’s definition for APD is complex, technical, and beyond the scope of this article. In plain language, though, someone with APD takes a self-centered approach to personal identity and social relationships and may also be hostile or violent.

Here are a few examples of psychopath in a sentence,

When to Use Sociopath

What does sociopath mean? Most people use sociopath as a synonym for psychopath. In mental health, the terms have historically referred to slightly different conditions.

Today, though, they both fall under the DSM-V’s category of antisocial personality disorder.

If you are the sort of person who enjoys making archaic distinctions, think of psychopaths as people who act in their own self-interest, without regard for the needs and feelings of others. Think of sociopaths as people who do the same thing but without feeling bad about it later.

Sociopaths were generally thought to lack conscience, on top of being pathologically selfish.

Check out these examples,

Some writers suggest that psychopaths are believed to possess some constitutional disposition to the syndrome, whereas sociopaths are biologically normal but develop antisocial characteristics through incompetent or hostile socialization.

In other words, psychopaths are born and sociopaths are made. This relates to the age-old debate of nature versus nurture.

In modern, colloquial usage, these terms are mostly interchangeable. They are obsolete in mental health fields; if you are writing in these contexts, it is better to use the DSM-V category Antisocial Personality Disorder.

Psychopath vs. Sociopath Check: While psychopaths and sociopaths are both seen as dangerous and hostile, sociopaths are better at hiding it, making them somewhat sly. Since sociopath and sly both start with S, it is fairly simple to remember the difference between these words.

This trick also plays into one of the examples from above from the TV series Sherlock. Sherlock says, “I’m not a psychopath, I’m a high-functioning sociopath.” Sherlock and sociopath both start with S.

Is it psychopath or sociopath? Psychopath and sociopath are outdated words that describe someone affected by what is now called Antisocial Personality Disorder.

In everyday use outside the context of mental health, they are basically interchangeable, but sociopaths generally display psychopathic tendencies without conscience or remorse.