Home » Too Much to Bear or Bare – Which is the Correct Spelling?

Homophones are words that mean two different things, even though they sound the same when spoken aloud. English has many homophones, like hare and hair, wear and ware, and bear and bare.

I will discuss the differences between too much to bare vs. too much to bear in this article. I will also use each of these phrases in a few example sentences, so you can see them in context.

Plus, I will demonstrate a memory trick that makes remembering whether to use too much to bare or bear easier.

When to Use Too Much to Bear

A writer might use too much to bear when describing something that he lacks the capacity to handle or when he is overwhelmed.

When to Use Too Much to Bare

As verbs, however, bare and bear have different meanings.

Bare means to expose something. A wolf might bare its teeth in a threatening display, for instance, or a man might bare his chest when he goes swimming.

Therefore, too much to bare has an entirely different literal meaning than too much to bear. It would refer to excessive exposure rather than excessive burdens.

Here are some hypothetical examples: 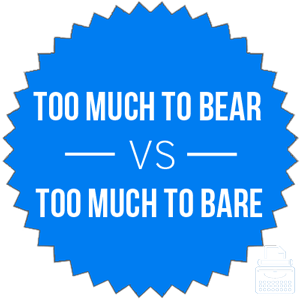 If you are using the fixed phrase to refer to an excessive burden, always use too much to bear. Too much to bare is usually a mistake based on the homophones bare and bear.

Too much to bear vs. Too much to bare: Remember that bear means to carry or endure as a verb, so substitute too much to endure in your mind when want to use this phrase as a reminder to use bear instead of bare.

Another commonly confused phrase is bear with me. For a full discussion, see here.

In summary, use too much to bear when you are using this idiom.