Home » Coliseum or Colosseum – Which is Correct?

If you are a sports fan, there is a good chance you have been to an event in a coliseum. Many cities have coliseums, and they can be small or very large.

Relatively few people, though, have been to the Colosseum. Astute readers might wonder how a Colosseum differs from a coliseum, and this article is for those readers.

What is the Difference Between Coliseum and Colosseum?

In this article, I will compare coliseum vs. colosseum. I will use each word in multiple example sentences that will allow you to see how it appears in context.

Then, I will share a memory tool that makes choosing either coliseum or colosseum in your own writing a breeze.

When to Use Coliseum

What is a coliseum? Coliseum is a noun that means a large complex, often centered on a stadium for sporting events or other large gatherings.

Coliseum itself is a common noun and does not need to be capitalized (except at the beginning of sentences). When it appears as part of the name of a specific venue (like the examples above), it should be capitalized as a proper noun.

When to Use Colosseum 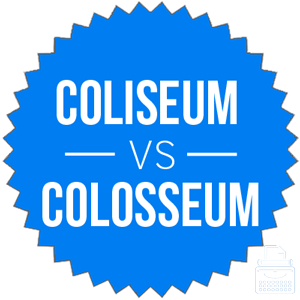 What is the Colosseum? Colosseum is also a noun. Colosseum is another name for the Flavian Amphitheatre in the center of the Italian city of Rome. It is also simply called the Roman Colosseum. In this usage, it is a proper noun and must always be capitalized.

Americans have always preferred coliseum to colosseum when referring to something other than the Flavian Amphitheatre. Colosseum was the preferred spelling in British English for these situations, until around 1970. Since then, both communities have standardized around coliseum as a common noun.

These charts show the relative usage of each term, colosseum vs. coliseum, across both language communities.

In Modern English, the only use Colosseum sees is in describing the Roman Colosseum, or Flavian Amphitheatre. In this use, it should always be capitalized. Coliseum is the spelling for all other uses, both as a common noun and the name of other venues than the one in Rome.

Since Colosseum contains and extra O, like Rome, it is easy to remember that this spelling is only used for the amphitheatre at the center of Rome.

Is it colosseum or coliseum? A coliseum is a large circular venue for sports or other events. There are many across the world. Only the one in the center of Rome, also known as the Flavian Amphitheatre, is spelled Colosseum.