Irregular verbs are a headache for even the most experienced writers.

Take lie for example. As a present participle, the word is conjugated to lying.

Given this irregular spelling, it makes sense that some writers would be tempted to include the Y in other conjugations, even the base form lye.

Unfortunately, though, lye is a separate word with its own meaning. It is never a conjugation of the verb to lie, but you might come across it anyway.

What is the Difference Between Lye and Lie?

In this post, I will compare lye vs. lie and will use each word in a few example sentences. That way you can see how they appear in context.

Plus, I will show you a helpful memory tool that will help make choosing lye or lie a little easier.

When to Use Lie

What does lie mean? The word lie can mean several different things. Sometimes, it is a noun that means a falsehood or untruth.

Lie also has a verb sense of this meaning, namely, to intentionally mislead someone by not telling the truth.

Lie can also be a verb meaning to recline horizontally.

Lie down or lye down? When talking about reclining or taking a nap, the correct spelling is lie down, not lye down.

When to Use Lye

What does lye mean? Lye is a noun. Lye is a word for the chemical sodium hydroxide.

There are many uses for this chemical. Lye is an important component of the process of making soap, and it can also be used to cure some foods. Lye is also used as a household cleaner.

It is very caustic: users must wear durable protective equipment because lye will cause painful burns if it comes into contact with the skin. Lye has a sordid history due to its ability to degrade tissue. Several murderers have used lye to dissolve the bodies of their victims, sometimes turning them into soap.

Here are some sentences that contain the word lye: 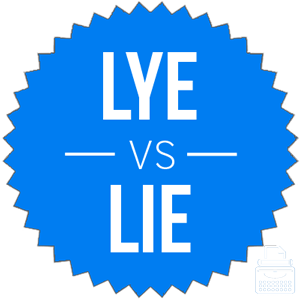 Lye is only used to refer to sodium hydroxide. For just about every other usage, choose lie instead.

It is lie or lye? Lye is a word for the chemical sodium hydroxide. Lie has many meanings as a noun and a verb, especially a falsehood, to tell a falsehood, and to recline horizontally.