The English language has many homophones, or words that sound alike but mean different things.

Born and borne are homophones, but they are unique in that they actually function as the same part of speech—they are actually the same tense of the same verb. Their usage, however, is determined primarily by context.

Continue reading to find out whether you should choose borne or born in your own writing.

Borne vs Born: What’s the Difference?

In this article, I will compare borne vs. born. I will use each word in a sentence to demonstrate its proper context.

Plus, I will show you a helpful mnemonic to use in situations when you can’t remember whether born or borne is the word you should choose.

When to Use Borne

What does borne mean? Borne is the past participle of the verb bear, and is thus used with a helping verb. It is a versatile word that can be used as a synonym for carried, suffered, kept, and sometimes given birth.

When to Use Born

What does born mean? Born is also a past participle of the same verb, bear, but has a more restricted meaning. In modern English, born is limited to one common use.

It is used in the passive, without the word by, as the standard way to refer to given birth, especially in the verb phrase was born. Born is also used as an adjective, where it describes a person’s origins. 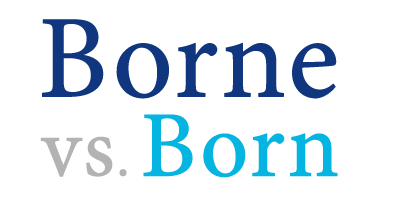 Here is a helpful trick to remember born vs. borne.

Both of these words are used as the past participle of the verb bear. Borne is the general-use form, with born being standard in contexts involving childbirth, and as an adjective to refer to a person’s origin.

These words can be confusing, but if you remember that the word childbirth is spelled without an E, you should be able to remember to use born for these situations, since born is also spelled without that letter.

Is it born or borne? Born and borne are alternative spellings of the same word, which is the past participle form of the verb bear. Even though, as verbs, they function the same in a sentence, they are used in different contexts.

Born can also be used as an adjective to describe a person’s origin.

Keep in mind that neither childbirth nor born is spelled with an E. You should only use born when you are referring to the birth of a child, or a place where a person was born.

To summarize, born refers to childbirth, and borne is used in reference to carrying something.