English verbs follow several patterns of conjugation. Many verbs are irregular, and some of those don’t follow the same rules as other verbs at all.

Other verbs, though, are regular, and are conjugated according to predictable rules and conventions. These verbs can be conjugated into the past tense with the suffix -ed.

The operative question with knit usually is, “What is the past tense of knit?” Is it a regular verb? Some writers use knit, but knitted is the standard past tense form.

What is the Difference Between Knit and Knitted?

In this post, I will compare knit vs. knitted. I will use each of these words in at least one example sentence, so you can see them in context.

Plus, I will show you how you can use a mnemonic device to make choosing knit or knitted a simpler process.

When to Use Knit

What does knit mean? Knit can be a noun, an adjective, or a verb.

As a noun, knit refers to a garment made by a specific process of needlework.

As an adjective, knit means denoting or relating to a knitting stitch.

In this article, however, we are chiefly concerned with the word’s verb form, where it means to fashion a garment by a certain needlework process. Knit forms various present and future tenses of this verb, but the standard past tense is knitted.

Knit can also mean to furrow, as in the action one does with one’s brow when one is deep in thought.

When to Use Knitted

What does knitted mean? Knitted is the past tense form of knit.

While some people use knit in the past tense, Bryan Garner of Garner’s Modern English Usage estimates knitted to be three times more common in this role. 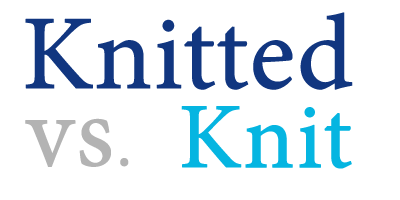 Now, let’s go over a helpful trick to remember knit vs. knitted.

Knit and knitted are both conjugation of the same verb: knit is the present and future tense form, and knitted is the past tense form.

Thus, you should choose knit for present and future knitting, and knitted for past knitting. You could say “I will knit a hat tomorrow,” but you would say “I knitted a hat yesterday.”

Since knit is a regular verb, your clue that knitted is in the past tense is its -ed ending. In this way, it follows other regular past tense verbs, like acquitted, gritted, and flitted.

Is it knitted or knit? Knit and knitted are conjugations of the verb knit, which means to make a garment with needlework.

Don’t forget to check this site any time you have further questions about confusing words or other writing topics.