Home » Breakdown or Break Down: What’s the Difference?

While listening to someone speak, have you ever thought you heard him or her say one word, but noticed that in context, it was used differently than what you’re used to hearing?

This confusion stems from homophones in the English language—words that sound alike but don’t mean the same thing.

Breakdown and break down are homophones. One is a noun; one is a verb; and neither is used as any other part of speech at any time. If you aren’t sure whether you are hearing breakdown or break down, reading this article will help you know.

What is the Difference Between Breakdown and Break Down?

In this article, I will compare breakdown vs break down. As part of this comparison, I will use them both in a sentence to illustrate the proper context of each. Plus, I will outline a useful memory tool to help you remember if break down or breakdown is correct, depending on how you plan to use the term.

When to Use Breakdown

What does breakdown mean? Breakdown functions as a noun. It refers to a cessation of function or a subdivision of items within a broader category, often on a financial document.

As you can see, in the sense where something stops working, breakdown can be literal or metaphorical. During a typical mental breakdown, the brain still functions at a biological process level, but psychological functioning is severely hampered.

Other uses of breakdown simple refer to a point-by-point analysis of something.

When spoken, only the first syllable of breakdown is stressed.

When to Use Break Down

What does break down mean? Break down is a phrasal verb. It has various meanings, the two most common of which are to cease functioning and to disassemble.

When spoken, break down has equal stress on each word. 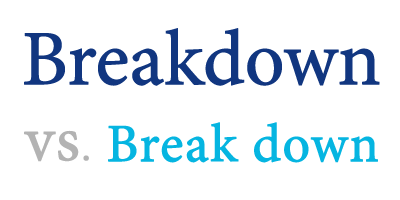 Here is a helpful trick to remember break down vs. breakdown

You can remember that the verb form has two words since one of these words is break, which is a verb in its own right. By looking at the meanings of the individual words in this phrase, you can remember what part of speech it is.

Is it breakdown or break down? In spoken English, breakdown and break down are indistinguishable except for the lack of stress on the second syllable of breakdown. They are otherwise pronounced identically.

You can remember to use break down as a verb by remembering the individual meanings of the words in this phrase.

Remember, you can also check this article for a quick refresher at any time.