We tend to make a big deal out of how to pronounce English words. Why don’t we worry about pronouncing the names of letters in the same way?

English uses a Latin alphabet, which derives many of its letters, including Z, from Greek. The Greeks called Z zeta, and other languages that feature this letter also use its Greek name.

Not English, though. Writers rarely need to spell out the names of letters, but if you are listening to an English speaker spell out a word, you might hear him or her using either zee or zed to refer to the letter Z. As it turns out, both of these pronunciations are correct, and which you use depends on where in the world you live.

What is the Difference Between Zee and Zed?

In this post, I will compare zed vs zee. I will use outline when each of these pronunciations is used and in what language communities.

I will also show you a mnemonic device that makes remembering whether to use zed or zee a little easier.

When to Use Zee

What does zee mean? Zee is the American English pronunciation of the letter Z.

Z is the 26th and final letter of the English alphabet. It is also the letter with the lowest frequency of use in English words.

Like I said, writers rarely need to spell out the pronunciations of letters. We would normally either just use the letter itself (like Z) or use the International Phonetic Alphabet (IPA) to represent the speech sounds (in this case, /zi:/).

Still, there are a few rare instances when you might want to spell out letter pronunciations in standard English characters, like these:

When to Use Zed

What does zed mean? Zed is the British English pronunciation of the letter Z.

Zed is closer to the original Greek zeta, which is probably why some speakers use it. This pronunciation is common in England and other places that use British English, like Australia and Canada.

You can substitute zed for zee in the sentences above without changing the meaning. 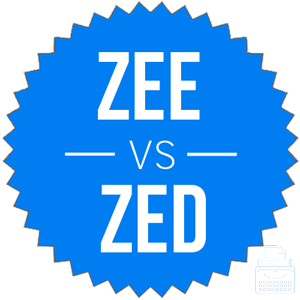 Zee and Zed are two different ways to pronounce the name of the letter Z out loud.

As a writer, you would be more likely to use the letter itself or the IPA in writing. Still, if you are trying to capture the way some individuals speak, you can use zee for American English and zed for British English.

Zee vs. Zed Check: Zed rhymes with Gateshead, a borough in England near Newcastle upon Tyne, so it should be easy to link zed with Britain in your mind.

Is it zee or zed? Zee and zed are alternative pronunciations of the name of the letter Z in American and British English, respectively. They are otherwise equivalent.

Writers would be more likely to use Z itself or the IPA to represent this character, but it is still important to know the difference between zee and zed in case you ever do need to use them.