If you go fishing by pulling a net through the water to trap fish, are you trolling or trawling? If you are using bait, would you use the same word?

The answer might surprise you. Troll and trawl have overlapping meanings in several contexts, but there are some situations where using one over the other is a better choice.

What is the Difference Between Trawling and Trolling?

In this post, I will compare troll vs. trawl. I will use each of these words in at least one example sentence, so you can see how they appear in context.

Plus, I will show you a helpful memory tool that makes choosing either troll or trawl a bit easier on your own.

When to use Trawl 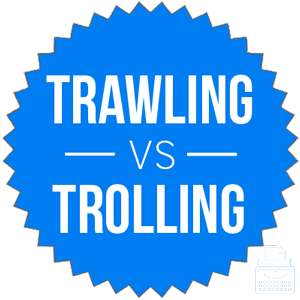 What does trawl mean? Trawl is a verb. It has two main meanings: to search for something and to fish by dragging a net through the water.

When to Use Troll

What does troll mean? Troll has two meanings that are easy to confuse with trawl. One of them is to search for information, like in the sentence below,

Troll can also mean to drag something through the water, especially in the case of fishing with a lure. A trolling motor is commonly used by fisherman for such purposes.

Troll can also mean several other things, including to bother someone on purpose and to sing loudly, two meanings that may have some overlap. Neither of these meanings are easily confused with trawl, though.

Troll is also a noun, where it means an ugly mythical creature that is depicted as either very small or very large.

There are two senses in which troll and trawl have overlapping meanings: to search for something and to fish by dragging something through the water. Regarding the first sense, the differences are largely contextual. When searching on the Internet, most people use troll. In other contexts, either word would be acceptable.

Trawling vs. Trolling Check: When referring to fishing, trawling involves a net, while trolling involves bait on a line. Since troll has an extra L, and lure starts with L, it is easy to remember that trolling involves pulling a lure through the water instead of a net.

Is it trawling or trolling? Troll and trawl are verbs that have overlapping meanings. Both can mean to search for something or to fish by dragging something through the water.

Despite their significant overlap, trawl and troll are most effective when used carefully in their proper contexts.