Home » Touch Base or Touch Bases – What’s the Difference?

Baseball players make a lot of money, even though not all of them write very well. Derek Jeter, a former shortstop for the New York Yankees, is renowned for being both a star ballplayer and an excellent communicator. Most athletes can only aspire to reach Jeter’s level in either of these categories, though.

While on the field, Jeter rounded the bases many times, but in press conferences, he probably knew to say touch base instead of touch bases. Why would he worry about such a thing? Continue reading to find out.

What is the Difference Between Touch Base and Touch Bases?

In this post, I will compare touch base vs. touch bases. I will use each phrase in an example sentence, so you can see them in context.

Plus, I will show you a memory tool that you can use to remember whether touch bases or touch base is more appropriate.

When to Use Touch Base

What does touch base mean? Touch base is a verb phrase. It means to quickly check in with someone.

After making plans for later in the day, two people might touch base at lunch to make sure they are both still available. Coworkers might also touch base on a project they are completing.

The phrase touch base probably originated from American baseball. In order to score points in baseball, a player must touch all four bases safely without making an out. This can actually be quite difficult: most teams only score three or four points (called runs) each game. The simplest way to score is, of course, to hit a home run.

This phrase is also increasingly common in the corporate world, where it has the meanings outlines above.

When to Use Touch Bases

What does touch bases mean? In baseball, a player must touch all four bases to score a run. However, in writing, you should only ever use touch base. Touch bases in an improper variant of this phrase, probably stemming from the actual rules of baseball.

Touch basis and touching basis are also incorrect, and probably based on phonological similarities between basis and bases.

The graph below shows the frequency of use of touch base and touch bases in the English-speaking community:

It’s not a perfect illustration; the graph only looks at books published since 1800, disregarding other print sources. Still, it is easy to see that touch base far outstrips touch bases in terms of overall usage. Touch basis barely registers at all. 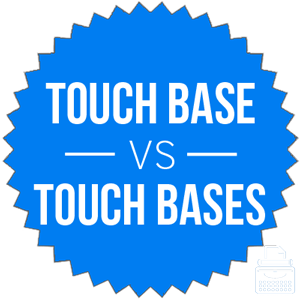 In baseball, it should be your goal to touch all the bases. In writing, you only need to touch one.

Touch bases and touch basis are both nonstandard variants of this phrase.

Remember: base and ace rhyme. You will ace your writing test if you use touch base instead of touch bases.

Is it touch base or touch bases? Touch base is a verb phrase that means to check in with someone.