As more and more laws are written, they forbid more and more things. Luckily, English has a variety of options for describing something that is against the law.

Illegal, illicit, and unlawful are three options that have been in use for centuries. Do they mean different things, or should choosing illicit or illegal boil down to which is most popular?

What is the Difference Between Illegal and Illicit?

In this article, I will compare illegal vs. illicit. I will use each of these words in at least one example sentence, so you can see them in context. Then, I will show you a way to memorize the correct usage of these words.

When to Use Illegal

What does illegal mean? Illegal is an adjective, where it means not in accordance with laws. In the world of sports, illegal also means against the rules.

Illegal is the most common of these three words, so unless you have a very specific circumstance, it will work in most cases. Also, it’s important to note that illegal is not the same thing as criminal.

When to Use Illicit

What does illicit mean? Illicit is another adjective that means against the law. It has connotations of immorality, as in the phrase illicit affair.

A third term, unlawful, has the same meaning as illegal and illicit. As you can see from the chart below, unlawful has been more common than illicit since at least 1800, but is no longer as popular as illegal.

This chart shouldn’t be considered scientifically accurate, since it only looks at books written in English since 1800, but it can still illuminate this clear, long-term trend in usage. 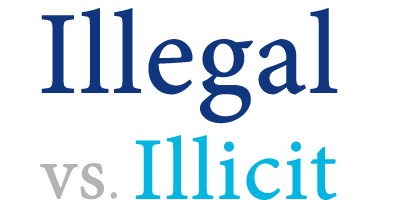 These adjectives are all synonyms, so you could use any of them and still be correct. In contemporary English, illicit carries shades of immorality, and is much less common than illegal or unlawful. Illegal is by far the most popular choice. It would be the most familiar term to most audiences and is, therefore, the safest choice.

Since you would probably also choose legal instead of lawful or licit, you can use illegal’s antonym as a reminder that it is the most common of these words.

Is it illegal or illicit? Illegal, illicit, and unlawful are adjectives that mean against the law. Illegal is the most commonly used, followed by unlawful, and trailed by illicit.

You can use legal as a reminder to use illegal in most cases, since these antonyms are both the most popular choice in their family of options.

If you have additional questions, you can check this site for a quick refresher.