More students are choosing to pursue post-secondary education than ever before. Many professions require an advanced degree or licensure for employment, and even a simple bachelor’s degree opens many doors in a broad variety of careers.

Continuing education is not the right choice for everyone, and many people lead very successful lives without ever setting foot in a college or university. Still, the majority of students find post-secondary education a compelling option, despite ever-increasing costs of attendance.

What is the difference between college and university? In everyday use, these terms are used interchangeably. In specific contexts, however, they have different meanings.

What is the Difference Between College and University?

In this post, I will compare the terms college vs. university. I will use each of these words in at least one example sentence, so you can see them in context.

I will also demonstrate the use of a mnemonic device that will help you choose either university or college for your own writing.

When to Choose College

Colleges offer two- and four-year degrees in various subjects, and some may also offer graduate studies.

See the examples below,

In British English, college is often a rough equivalent to high school in America, but with a more specialized nature.

In both American and British English, college could also refer to an individual school or program within a university.

When to Use University

What does university mean? In both American and British English, university is a post-secondary institution that offers undergraduate and graduate degrees in a variety of subjects across several programs. 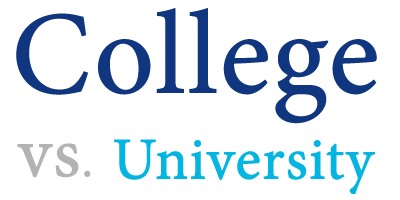 Now that you know the difference between these two, let’s go over a trick to remember university vs. college.

A university is a collection of specialized schools. A college is one school. Often, universities are comprised of several colleges.

Just like the universe contains many schools, a university will usually also contain many schools. You can use the similarity between universe and university to remember the meaning of this word.

Is it college or university? College refers to a type of post-secondary school, or in British English, some secondary schools as well. A university is a conglomeration of schools that offers both undergraduate and graduate degrees.

Since universe and university are similar words, and each contains several schools, it should be little trouble to remember the differences between these words.

Remember, you can always check back on this article any time you need help picked university or college.