In most cases, young adults spend a few years renting property before buying a home outright. This is done for any number of reasons: increased home prices, job relocation, income history, etc. Renting has some benefits to home ownership, but most people would prefer to own their own home.

The mistake is understandable. Both words function as nouns, and if they are not pronounced carefully, they sound identical when spoken out loud. But the truth is that these are two distinct words with meanings that never overlap.

What is the Difference Between Tenants and Tenets?

In this post, I will compare tenets vs. tenants. I will include several example sentences for each word to give you an idea of how it should appear in context.

I will also show you a helpful memory tool that makes choosing tenets or tenants a bit easier.

When to Use Tenants 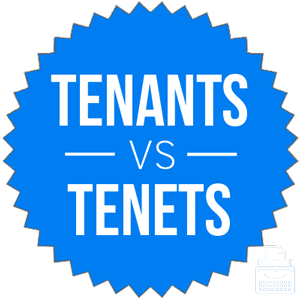 What does tenants mean? Tenants is a plural noun. A tenant (singular) is someone who rents property.

Tenants, therefore, refers to more than one such person. A landlord might seek new tenants when the current ones move away, for example.

Here are a few more sentences that include the word tenants,

Tenant has been around since Middle English—even earlier if we count its roots as a conjugation of an Anglo-French verb that meant to hold.

When to Use Tenets

What does tenets mean? Tenets is another plural noun. Tenets means foundational beliefs, especially of a religion or other doctrine.

Here are a few more examples of tenets in context,

Similarly to tenant, tenet is derived from an outdated foreign verb that meant to hold. For tenet, however, the root word is Latin, not French.

Misusing tenant for tenet is a common mistake. Mixing them up the opposite way is less common but still a real possibility.

Tenant vs. Tenet Check: To keep them straight in your mind, remember that tenant and occupant both mean someone who lives in a place, and both end in -ant.

Is it tenant or tenet? Tenets and tenants are plural nouns that are often confused with each another.

The two can never be properly substituted for each other, so be sure to remember which is which.