In English, words that sound alike when spoken aloud but also have different meanings are called homophones. Councilor and counselor are great examples because even though most speakers pronounce them to be identical, their meanings never overlap in any contexts.

If there were a council of counselors, members could be both a councilor and a counselor at the same time. Still, the words themselves refer to different roles, and it is important to use each in its proper context.

Continue reading to learn more about the difference between councilor and counselor, and how to use each correctly.

What is the Difference Between Counselor and Councilor?

In this post, I will compare councilor vs. counselor. I will use each of these words in at least one example sentence, so you can see them in context.

Plus, I will show you a helpful memory tool that will allow you to choose councilor or counselor correctly every time.

When to Use Counselor

What does counselor mean? Counselor is a noun. It means one who provides guidance, especially in an academic or therapeutic setting. Quite simply, then, a counselor is someone who counsels.

The examples below show counselor in a sentence.

Counselor can be pluralized to counselors.

Counselor and councilor have root words that are also homophones (counsel and council, respectively).

When to Use Councilor

Councilor is a noun. Its plural form is councilors. 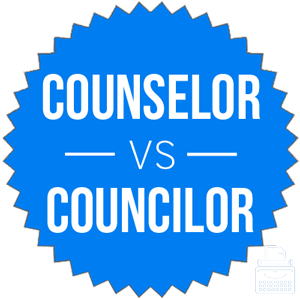 Now, let’s go over a trick to remember counselor vs. councilor.

Since counsel and therapy each contain the letter E, you should always be able to remember that a counselor gives guidance or therapy.

Is it counselor or councilor? Counselor and councilor are two English homophones.

The two words are never interchangeable, despite being pronounced identically by many speakers.