Directional adverbs are, intuitively, adverbs that specify direction. They modify verbs by giving more detail about how they are performed. You can count backward from 100 or forward from 100, but only by counting backward will you ever reach 0.

What about when these words are also adjectives, like backward? Continue reading to learn more about the multiple uses of this particular directional adverb.

What is the Difference Between Backward and Backwards?

In this post, I will compare backwards vs. backward. I will use each of these words in at least one example sentence, so that you can see them in context.

Plus, I will also show you a helpful memory tool that makes choosing either backwards or backward a little easier.

When to Use Backward

What does backward mean? Backward can be either an adjective or an adverb.

As an adjective, backward means regressive or underdeveloped.

Backward is also a directional adverb. It is the opposite of forward, namely, the direction behind someone.

There are some usage differences to remember. In British English, backward is only an adjective. The British typically add an -s to the end of their directional adverbs. In this case, the resulting word is backwards.

When to Use Backwards

What does backwards mean? Backwards is a directional adverb. It has the same definition as backward above, but it primarily appears in British English. Check out the charts below.

The graphs aren’t 100 percent exhaustive in their scope, since they only look at books published in English since 1800, but they clearly illustrate long-term usage trends. 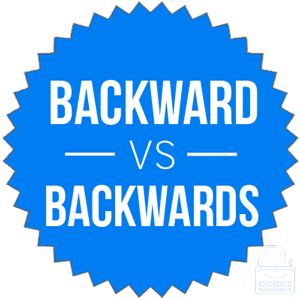 Is it backward or backwards? Backward is an adjective that means regressive or underdeveloped. It is also a directional adverb in American English. In British English, it becomes backwards as a directional adverb, so keep your audience in mind when choosing one of these words.