Someone who has the skills to do something well is considered competent. Two nouns are related to this word: competence and competency.

You aren’t alone if you are hard pressed to find a meaningful semantic difference between the two. Continue reading to learn more about these confusing words.

What is the Difference Between Competence and Competency?

In this post, I will compare competency vs. competence. I will use each of these words in some example sentences that show them in their proper contexts.

Then, I will use a mnemonic device that makes choosing either competency or competence much easier for your own writing.

When to Use Competence 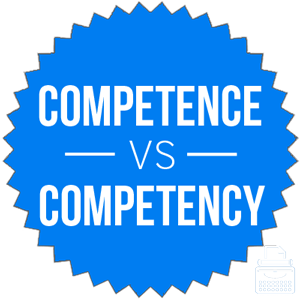 What does competence mean? Competence is a noun. It refers to the ability to do something, usually at a basic or acceptable level. One who develops competence in a trade can work in that trade at a level basically equivalent to most peers.

The related adjective is competent, like in the phrase he was competent, but not outstanding.

Like so many English words, competent can be traced back through Middle English to origins in Latin, where it was related to a verb equivalent to the English compete.

When to Use Competency

What does competency mean? Competency is an alternative version of competence. Many sources consider it to be a needless variant, since it means the same thing: a basic ability to do something.

The term also has a legal sense, competency to appear in court, which means that a person is able to function at a basic level in a courtroom. A person who has a severe mental disability, for instance, might be impaired to the extent that she would be considered legally incompetent.

Here are some sentences that use competency correctly,

In most situations, you should stick with competence as a noun meaning a basic ability to do something. Competency is a variant that has found a home in some professional and legal contexts, but as a word, it is largely unnecessary.

Competence vs. Competency Check: Since competency and silly both contain the letter Y, remember that competency is a silly word so that you will always know to use competence unless you have a good reason to do otherwise.

Is it competence or competency? Competence and competency are variants of a noun that means a basic ability to perform a task.