English is full of tiny nuances in meaning. The words award and reward, for example, might seem to mean exactly the same thing.

If you are a behaviorist, though, the differences between awards and rewards are massive, and failing to recognize these differences can turn a promising intervention strategy into a hopeless failure.

What is the Difference Between Award and Reward?

In this post, I will compare reward vs. award. I will use each of these words in example sentences, so you can see them in context.

Then, at the end of the post, I will also show you a useful memory tool that will help you decide whether something is an reward or award.

When to Use Award

What does award mean? Award can be a noun or a verb.

As a noun, award refers to a prize given in recognition of an achievement.

As a verb, award means to give something in recognition of an achievement.

Award is a regular verb, and it follows the standard English conjugation rules. Here are a few ways to conjugate this verb:

An award is something that is given to recognize someone’s achievements. For instance, an athlete might receive the MVP award. A passionate teacher might receive a teacher of the year award.

In senses such as these, you would never use reward.

When to Use Reward

What does reward mean? Reward can also be a noun or a verb. In both usage cases, its meaning overlaps with award significantly. A reward is a contingent benefit for an action. For example, an extra five minutes of recess might be a reward for excellent classroom behavior.

As a verb, reward means to give someone something for their actions. Here are a few more examples:

A reward has less to do with achievement and more to do with an action or exchange. For example, if you see a flyer for a lost cat, it might say there is a reward of $20. In these types of examples, you would never use award. 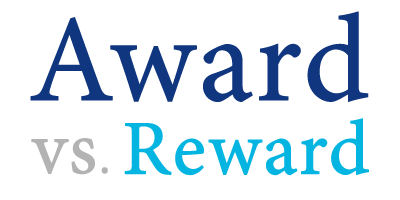 Reward and award have very similar meanings. They both refer to something received as a result of one’s actions.

The main difference between these words is that an award is always given by someone: Olympic judges give awards, as do classroom teachers and store managers.

In contrast, a reward may not always be given by someone. In behavior modification frameworks, for example, a reward might be something intrinsic, like relief from hunger or the satisfaction achieved by beating everyone else in a game.

Award vs. Reward Trick: Award and achievement both contain the letter A, and an award is usually something given by one person to another for some sort of achievement. Rewards aren’t always given by someone, and they don’t necessarily have to do with an achievement.

Is it award or reward? Award and reward can both be nouns and verbs.