It’s not easy to tell whether you have a cold or the flu, at least at first. Sometimes, you might wonder whether there is any difference at all between these two sicknesses.

Why do we have different words for them? When you’re sick with one of these conditions, the difference between them can seem academic, since you’re sick either way. In medical contexts, though, there are distinct differences between these maladies.

What is the Difference Between Cold and Flu?

In this post, I will compare cold vs. flu. I will outline a brief definition of each of these sicknesses, as they are commonly understood, and use each word in at least one example sentence.

Plus, I will show you a helpful memory tool that will make choosing either cold or flu in your own writing a much simpler prospect.

When to Use Cold 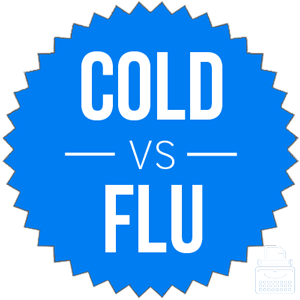 What is the common cold? Cold can be an adjective or a noun.

As an adjective, it means at a low temperature.

In this article, though, we will focus on the use of cold as a noun, where means a mild sickness affecting the respiratory system. This usage is usually manifested in the phrase the common cold, a casual term for a collection of viral infections with similar symptoms that affect the upper respiratory tract.

A person who has the common cold might have a fever, unusual drowsiness, a headache, and a cough. These sicknesses typically last anywhere from 24 hours to several weeks, depending on a person’s age, immune health, and the severity of the infection.

When to Use Flu

What is the flu? Flu is another noun. Flu is short for influenza, which is an infection caused by a specific virus. Influenza can also refer to the virus itself, which has three common subtypes.

The flu has similar symptoms to the common cold, including respiratory congestion, a cough that may last for up to two weeks, and a weakened immune system. However, complications from the flu, which can include pneumonia and inflammation of existing health problems, can be much more severe.

Here are some examples of flu in sentences,

In your writing, remember that flu is short for influenza, which is the specific virus that causes this type of infection. If you are writing in a medical context, you should only use flu when this virus is present.

Is it the flu or the cold? While there might be significant overlap in common usage (and in how you feel when you have one of these infections), in medical contexts, these are separate conditions.