Home » Himself or Him self – Which is Correct?

Pronouns are a valuable part of any writer’s toolbox. They allow writers to refer back to the subject of a sentence or clause without repeating themselves. I myself used the pronoun themselves just now so that I didn’t have to use the noun writers twice in a row.

Some pronouns, though, are compound words. Is it ever appropriate to spell these words out separately, like himself as him self, for instance?

What is the Difference Between Himself and Him self?

In this post, I will compare him self vs. himself. I will use outline the correct spelling of this reflexive pronoun and use it in example sentence so you can see it in context.

Plus, I will show you a helpful memory tool that you can use to make the job of choosing him self or himself a little easier.

When to Use Himself

What does himself mean? Himself is a pronoun. It refers back to the subject of a sentence or clause, when that subject is a male person or animal. It can be used reflexively (he gave himself a tattoo), or for emphasis (he himself should ring the bell). It can also be used in absolute constructions.

When to Use Him Self

What does him self mean? The construction him self does not function as a pronoun. Him is a pronoun, though, and it refers to a male person or animal. When spelled as a separate word, self is a noun, where it means a person’s own being or body.

Him is a very common pronoun. It can be used to refer to basically any male, for instance, if you have already named the person in a sentence and don’t want to be repetitive. Here’s an example:

Him isn’t a reflexive pronoun, though, so it couldn’t be used in the example sentences for himself in the previous section.

The noun self is usually seen in psychology and self-help contexts. A TV personality might advertise a book series with the motto love your whole self, for instance, or a therapist might try to help a client develop a stronger sense of self after a personal tragedy.

Nonetheless, though, the words him and self do not appear next to each other as a reflexive pronoun. The chart below, which graphs himself vs. him self, shows that him self is rarely used for any purpose at all in published English works:

It’s not a scientific graph, since it only looks at sources published in English since 1800. Still, it paints a clear picture of himself as a reflexive pronoun, and him self as probably nothing more than a mistake.

When to Use Hisself 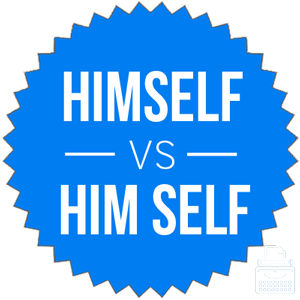 What does hisself mean? Hisself is a nonstandard spelling of the pronoun himself. In professional writing, it is nothing more than a spelling error.

As a fiction writer, however, you might find yourself writing passages of dialogue using this spelling to typify that of a particular dialect.

You should only ever use himself as a personal pronoun. Him and self are fine as individual words, but they seldom appear adjacent to each other without being compounded.

Since other reflexive pronouns like herself, myself, and themselves are also compound words, you can group them together in your mind as a reminder not to spell himself as separate words.

Is it himself or his self? Himself is a reflexive pronoun that refers back to a male subject of a sentence or clause. Him self is a variant that should be avoided.