When an entire concept or operation hinges on a single element, we call that element a linchpin. In less grandiose contexts, a linchpin is also a small device inserted through a hole at the end of a rod to keep things from falling off of it.

Like many words, linchpin has an alternative spelling: lynchpin. You’ve probably even seen lynchpin in published writing, like serious journalism or careful prose.

So which version is correct? Can you use either word in any context? Continue reading to learn more about these spellings.

What is the Difference Between Lynchpin and Linchpin?

In this post, I will compare lynchpin vs. linchpin. I will use each word in at least one example sentence, so you can see how it appears in context.

Plus, I will outline a helpful memory tool that makes choosing either lynchpin or linchpin much easier for your own writing.

When to Use Linchpin 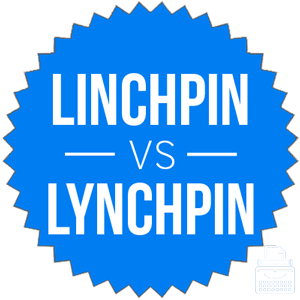 What does linchpin mean? Linchpin is a noun. Its original meaning is a locking pin inserted into a shaft to keep wheels or other parts from falling off the end.

Less literally, linchpin can also mean a central component that holds important parts of a device together.

Many writers use linchpin in a strictly metaphorical sense to refer to the most important part of something.

When to Use Lynchpin

What does lynchpin mean? Lynchpin is a variant spelling of the same noun. It is used somewhat frequently, although it is nonstandard and incorrectly suggests an association with lynch.

Lynchpin is actually closer to the original spelling of the word in Middle English, which derived from an Old English word lynis.

Here are a few examples of lynchpin in a sentence,

Even though lynchpin is closer to the original spelling of the root word, it is less common today. The graph below shows the relative usage of linchpin vs. lynchpin over time,

As you can see, linchpin has been the preferred spelling for at least 200 years.

Today, you should use linchpin, as it is the standard spelling of this word. Lynchpin is not uncommon, but stick with linchpin unless you have a good reason to do otherwise.

Since linchpin has two I’s, and a linchpin is a locking pin, use the spelling of the word as a memory tool to help you remember which version to use.

Is it linchpin or lynchpin? A linchpin is a locking mechanism on the end of an axle or other shaft that ensures all components remain on it.