Home » Ingrained or Engrained – What is the Difference?

Have you ever had an ingrown toenail? They are painful, and you’re lucky if you have never experienced one.

While having nothing to do with our words today (ingrained vs. engrained) some people mistakenly think that ingrain and engrain are related to the word ingrown. Ingrain and ingrown are completely different words, however, and neither of them is related to the other.

With that out of the way, let’s look at the differences between ingrain and engrain.

What is the Difference Between Ingrained and Engrained?

In this post, I will compare ingrain vs. engrain. I will outline which of these spellings is more common and more appropriate for your writing.

Plus, I will show you a helpful memory tool that will make choosing either engrain or ingrain much easier.

When to Use Ingrain 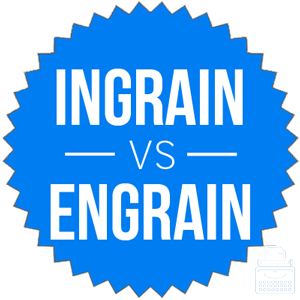 What does ingrain mean? Ingrain is a verb that means to impress deeply.

It is a regular verb and can be conjugated in the following ways,

Ingrain can apply to many contexts. A perspective might become ingrained into a person’s thinking, for instance, so that he doesn’t even recognize its influence anymore. With enough pressure, a mark could be ingrained into a surface, like tire tracks on a dirt road.

The adjective form of ingrain is ingrained.

When to Use Engrain

What does engrain mean? Engrain is an alternative spelling of the same word. It is considered correct, but its usage is rare.

This chart shows the relative usage of the verbs engrain vs. ingrain,

This chart is not exhaustive in its literary scope, since it only looks at books published in English since 1800. Still, it shows a clear long-term usage trend in favor of ingrain.

The same trend holds true in both American and British English.

The adjective form of engrain is engrained.

You can use either of these words in your own writing; they are interchangeable.

Your readers are more likely to be familiar with ingrain. Unless you have a compelling reason to do otherwise (like specific instructions from an editor or professor), you should default to ingrain over engrain.

Is it ingrained or engrained? Ingrain is a verb that means to impress something deeply or permanently. Engrain is an alternative spelling, but it is not as common and not as widely recognized.