As languages go, English is relatively young. It borrowed many of its words from languages that already existed, like Latin, French, and older Germanic languages. Some loanwords have become so deeply integrated that most people don’t recognize them as not being native English words.

Others, though, are more obvious. Bourgeoisie, for instance, is unmistakably French, but it has become integrated into English. Another word, bourgeois, is also French.

Do these words mean the same thing? Continue reading to learn more.

What is the Difference Between Bourgeois and Bourgeoisie?

In this post, I will compare bourgeois vs. bourgeoisie. I will use each of these words in at least one example sentence, so you can see how it appears in context.

Plus, I will show you a helpful memory tool that will make it easier to choose either bourgeois or bourgeoisie in your writing.

When to Use Bourgeoisie 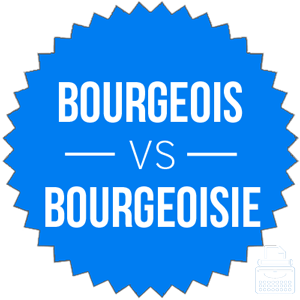 What does bourgeoisie mean? Bourgeoisie is a loanword from French and functions as a noun. It refers to the middle class of a society or the group of people between the poor and the wealthy upper class.

During the French Revolution, the bourgeoisie revolted against the monarchy and established a republic that gave them more personal liberties. The bourgeoisie also played a strong role in the global industrial revolution of the 18th and 19th centuries.

When to Use Bourgeois

As a noun, it has a similar meaning to bourgeoisie, where it means the middle class. Bourgeois can also refer to a specific member of the middle class, in other words, an individual person.

As an adjective, it means of or pertaining to the middle class. In practice, this term is usually used derogatively, with connotations of privilege, isolation from real social problems, arrogance, or vanity. This is also the origin of the term bougie.

If you are using the word as an adjective, your only option is bourgeois. Bourgeoisie is only a noun.