English is full of jargon, slang, and other terminology that mostly appears in specific, narrow contexts.

Occasionally, though, a word will jump from its niche into broader usage, often confusing everyday language users who weren’t familiar with its original context.

Continue reading to learn about this obscure word and its occasional homophone.

What is the Difference Between Lede and Lead?

In this post, I will compare lede vs. lead. I will use each of these words in at least one example sentence, so you can see how it appears in context.

I will also show you a helpful memory tool that makes choosing either lede or lead much easier in your own writing.

When to Use Lead 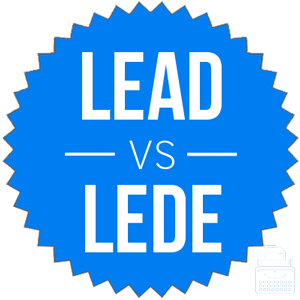 What does lead mean? Lead has several meanings as a verb and an adjective, but, in this article, I will focus on its use as a noun.

Even as a noun, it can mean multiple things: sometimes it means first or the foremost position in a competition or ranking. Other times it means a path of inquiry in an investigation.

Its crucial meaning to us here, though, is in the context of journalism. In the mid-20th century, before the dawn of the computing age, many newsrooms used Linotype machines to print newspapers. These machines used thin metal devices called leads to separate lines of print in the machine. Thus, a lead in this context refers to a thin strip of metal in a 20th century printing machine.

In this usage, lead rhymes with bed.

When to Use Lede

What does lede mean? Lede is a noun with an interesting history. It originated in newsrooms sometime between 1950 and 1970, where it was used as slang for the first sentence of a story. The Oxford English Dictionary put it in the 1950s, while Merriam Webster puts it around 1970.

Today, it is most commonly used in the phrase bury the lede, which refers to failing to emphasize the most important part of a story.

Of course, lead in the sense of first or primary would work equally well here. In newsrooms of the past, however, lead also referred to the metal strip separating lines of print in the Linotype machines. The more leading that you included meant more white space on the page. If you subtracted lead or leading, there would be less white space between lines.

These two competing words caused regular and understandable confusion among newsroom workers, particularly the printers and typesetters, because they weren’t always able to distinguish the word from the text that needed to be printed.

Eventually, someone decided to use the spelling lede for the first sentence of the story. Lede rhymes with need.

In the context of mid-20th-century era newsroom lingo, lead referred to the metal device separating lines of print in some machines. It rhymed with bed. Lede referred to the first sentence in a newspaper article.

Lead vs. Lede Check: Since lead and separate both contain the letter A, it is easy to remember that lead refers to a device for separating lines of print in this narrow context.

Is it lead or lede? In many 20th century newsrooms, the noun lede was slang for the first line of a story.

Lead has many meanings as many different parts of speech, including as a synonym for the adjective first. It also referred to a component in a Linotype machine that separated lines of print, which meant that newsroom workers weren’t always sure how the word was being used. They developed lede to differentiate these meanings.

Today, lede primarily appears in the phrase bury the lede, which means to hide a main point amidst distracting details.