Home » Underway or Under Way – What is the Difference?

If an event has already begun, we could also say that it is under way. Or is it underway?

Technically, it could be either, but in the above sentence, writers would traditionally use under way, not underway.

Both of these terms are adjectives, and they both mean the same thing, but there are subtle usage differences that writers have historically take note of.

What is the Difference Between Underway and Under Way?

In this post, I will outline the traditional rule regarding these two words while comparing under way vs. underway. I will use each variation in at least one example sentence, so you can see how it appears in context.

Plus, I will show you a helpful mnemonic device that will make choosing under way or underway a bit easier.

When to Use Under Way

What does under way mean? Under way is an adverb that means in progress. It can also be an adjective, where it has the same meaning, except that it modifies nouns instead of verbs.

When to Use Underway

One could write that the proceedings are under way, for instance, or instead simply reference the underway proceedings. These phrases mean the same thing, but the second is shorter and simpler, which can be advantageous.

Can Underway Always Be A Single Word?

What I have outlined above is the traditional rule regarding underway vs. under way. This rule is still outlined in many dictionaries, but underway is increasingly being used as a single word in all of its senses, especially in phrases like get underway and be underway, which would traditionally be spelled as two words.

Until recently, many major newspapers split the word in two. The AP Stylebook recently (2013) changed its stance and accepted underway in all senses.

Its entry on the word states,

It seems that writers are moving toward the one-word spelling in all senses, so while some may notice that you have the words separated, most people will not even notice it.

Additionally, the closed spelling seems more natural and it a welcome change. The traditional distinction is a bit complicated and doesn’t offer much, if any, clarity in use. 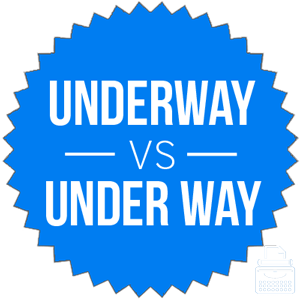 If you do choose to observe the traditional rule, here is a helpful mnemonic. But remember, the current trend appears to be toward the closed compound: underway.

Only under way functions as an adverb. If that is how you are using the term, separate it into two words.

As an adjective, though, the only difference between these variants is where in the sentence they appear. Underway comes before nouns, while under way comes after verbs.

Since under way and after verbs each have two words and three syllables, remembering that under way comes after verbs is not difficult.

Is it underway or under way? Under way and underway are both adjectives that mean in progress.