Homophones have confused English writers since writers began writing in English. A homophone is a word that is pronounced the same as another word but has a different spelling and a different meaning.

By and bye are both common words, so it’s no surprise that they are misused often. You don’t have to be one of those people making this mistake, though—continue reading for an explanation of the differences between these confusing words.

What is the Difference Between Bye and By?

In this post, I will compare bye vs. by. I will use each of these words in at least one example sentence, so you can see how they appear in context.

Plus, I will show you a helpful memory tool that will make it much easier to use bye or by correctly every time.

When to Use Bye 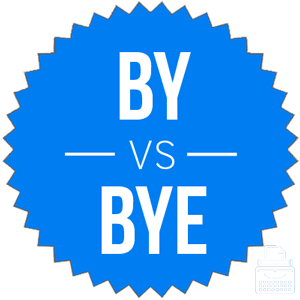 What does bye mean? Bye is short for the word goodbye, which is a way to say farewell. A person who is saying farewell to a woman named Felicia, for instance, might say “Bye, Felicia.”

Bye can also refer to an uncontested round in a tournament, wherein a competitor may advance without having to win a match. This meaning came from lawn tennis, and is now widely used in the world of sports.

When to Use By

What does by mean? By is an adverb and a preposition.

As an adverb, by means past, as a bullet might fly past someone’s head.

As a preposition, by indicates who performed an action. A form could have been completed by the human resources director, for instance, or a man could have been kicked in the face by his wife.

When to Use Buy

What does buy mean? A third homophone to bye and by is the word buy, which can function as a verb or a noun.

As a verb, to buy something means to purchase it.

When you get groceries to make dinner, you are buying food, and when you go to the mall to get clothes, you buy them.

As a noun, buy refers to the item that one purchased.

Bye is a way to say farewell, or a free pass to the next round of a tournament. By is either a preposition or an adverb.

By vs. Bye Check: Since bye has an E, like hockey, you will always be able to remember that bye refers to an unopposed round that a hockey team might play in a tournament.

Additionally, farewell, contains an E (two of them actually), so you can remember that saying bye is saying farewell.

Is it by or bye? The terms are not interchangeable, so be sure you know which is which before using either in your own writing.