When you win an award for doing well in sports, do you receive a medal or metal?

These two words are homophones, which means that they sound alike when pronounced out loud but mean different things in most contexts. One of the reasons these words are confusing is that one is usually made from the other.

For instance, gold, silver, and bronze are metals. But depending on context, they can also refer to medals.

If that sounds confusing, you aren’t alone. Continue reading to learn more about these difficult homophones.

What is the Difference Between Metal and Medal?

In this post, I will compare metal vs. medal. I will use each of these words in at least one example sentence, so you can see how they appear in context.

Plus, I will show you a helpful memory tool that will make choosing metal or medal easier in your own writing.

When to Use Medal 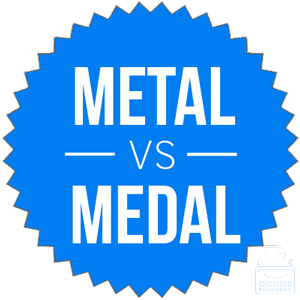 What does medal mean? Medal is a noun. It is an award given for excellent performance, like in the Olympics.

Sometimes, medal is used as a verb, where it means to receive this type of award in a competition.

When to Use Metal

What does metal mean? Metal can be a noun or an adjective. As a noun, metal refers to an elementary substance that is typically shiny and conductive. Various types of metal are common building materials, along with stone, wood, and other substances. Metal can also refer to a genre of rock music.

Like medal, metal can also be used as a verb, where it means to make something out of metal or to plate something with metal.

Metal and medal are homophones. They are confusing because medals are typically made from various types of metal, like gold, silver, and bronze.

Medal vs. Metal Check: Remember, a medal is a type of award. Since medal and award both contain the letter D, it should be easy to remember to reserve medal for this usage. Metal refers to the substances themselves, rather than the objects made from them.

Is it medal or metal? Medal and metal are homophones that can both be nouns.

The words are confusing since medals are typically made of metals like silver, gold, and bronze.