The English language borrows words from many other languages. While English itself is Germanic, many words from Romance languages like French, Spanish, and Latin have made their way into the English lexicon over the centuries.

Supersede is one of these words. It can be traced back to a Latin verb, and while it’s probably not the most common word you will ever hear, it has an important meaning that cannot be succinctly replicated.

You may also have seen the word supercede in some sources and wondered whether it is a different way to spell supersede, or a different word altogether. These spellings have been a source of confusion for generations of writers, but this article should clear up some of that confusion.

What is the Difference Between Supercede and Supersede?

In this post, I will compare supersede vs. supercede. I will outline the correct spelling and use it in several example sentences, which will give you an idea of how it should appear in context.

Plus, I will show you a helpful memory tool that will make choosing either supercede or supersede much easier.

When to Use Supersede 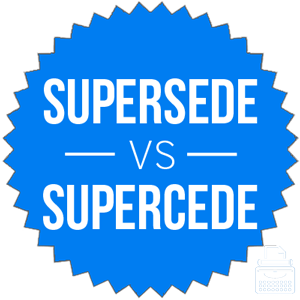 What does supersede mean? Supersede is a verb that means to replace something or to surpass something in terms of importance. It is a regular verb, and is conjugated according to the normal English rules.

Here are a few ways to conjugate supersede,

Here are some example sentences that contain supersede:

Supersede comes to us in the present day from Middle English, where it was borrowed from French and, ultimately, a Latin verb that means to sit.

When to Use Supercede

What does supercede mean? Supercede is a misspelling of supersede. Since several English words do end with the letters –cede, the mistake is understandable.

Both –cede and –sede have their roots in Latin verbs, and supercede has been a somewhat common mistake for several centuries.

This chart below graphs supercede vs. supersede in English books since the year 1800,

As you can see, supersede is several times more common. In his book Garner’s Modern English Usage, Bryan Garner estimates the difference to be 12:1.

Since there’s only one correct spelling, your choice with these two words in easy.

Since supersede is spelled with an extra S, and its Latin root verb means sit, remembering to use supersede should not be too difficult. Also, think of the extra S in the word as standing for “surpass,” which relates in meaning to supersede.

Is it supersede or supercede? Supersede is a verb that means to replace something or to surpass something in importance.

You should only use supersede in your own writing.