As living conditions improve around the world and advances in healthcare elongate life expectancy for most humans, the helping professions will see immense growth. After all, someone has to take care of people as they age past the point where they can sufficiently care for their own needs independently.

Caregivers and caretakers are part of the helping professions, but do they perform the same tasks? What is the difference between someone who gives care and someone who takes care?

What is the Difference Between Caretaker and Caregiver?

In this post, I will compare caregiver vs. caretaker. I will use each of these words in at least one example sentence, so you can see how they appear in context.

Plus, I will show you a helpful memory tool that will make choosing either caretaker or caregiver a bit easier.

When to Use Caregiver 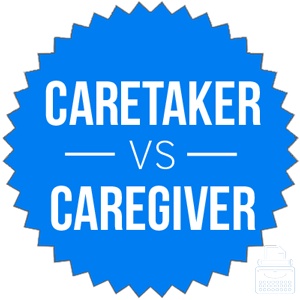 What does caregiver mean? Caregiver is a noun that means one who supports another person. This support could be physical, as in the case of the elderly or disabled, emotional, or psychological, as in the context of many caring professions.

Caregiving is a profession in the field of human services. A caregiver may provide support in a client’s own home, either on a live-in or visiting basis or work in a facility.

Here are a few examples of caregiver in sentences,

When to Use Caretaker

What does caretaker mean? Caretaker is a similar noun. It is a synonym of caregiver when it means one who gives support to another person. Caretaker can also refer to a person who supports inanimate objects, like personal property or a building.

British English has another synonym, carer, which is even more popular. The charts below show the relative usage of these three terms in both language communities.

These charts aren’t exhaustive in their scope (they only look at books published in English since 1800), but they clear the preferences for caretaker vs. caregiver in American vs. British English.

Americans prefer caregiver and rarely ever use carer. On the other hand, British users prefer carer to either caregiver or caretaker, which are about neck-and-neck for second place.

If you are describing someone who cares for something that isn’t a person, you should use caretaker in both American and British English. For example, someone who attends the grounds of a cemetery is a caretaker.

For someone who cares for a person, use carer in British English and caregiver in American English.

Since carer is a two-syllable word, like London, it should be simple to remember that carer is the British version of this term.

Is it caregiver or caretaker? Caregiver, caretaker, and carer are nouns that mean one who gives support to another person. Caretaker can also refer to support for inanimate objects.